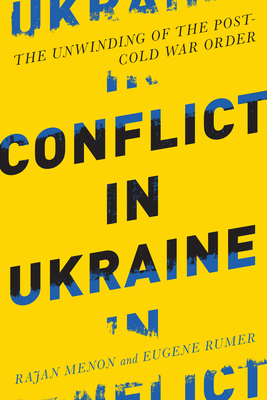 By Rajan Menon, Eugene B. Rumer

The current conflict in Ukraine has spawned the most serious crisis between Russia and the West since the end of the Cold War. It has undermined European security, raised questions about NATO's future, and put an end to one of the most ambitious projects of U.S. foreign policy—building a partnership with Russia. It also threatens to undermine U.S. diplomatic efforts on issues ranging from terrorism to nuclear proliferation. And in the absence of direct negotiations, each side is betting that political and economic pressure will force the other to blink first. Caught in this dangerous game of chicken, the West cannot afford to lose sight of the importance of stable relations with Russia.

This book puts the conflict in historical perspective by examining the evolution of the crisis and assessing its implications both for the Crimean Peninsula and for Russia’s relations with the West more generally. Experts in the international relations of post-Soviet states, political scientists Rajan Menon and Eugene Rumer clearly show what is at stake in Ukraine, explaining the key economic, political, and security challenges and prospects for overcoming them. They also discuss historical precedents, sketch likely outcomes, and propose policies for safeguarding U.S.-Russia relations in the future. In doing so, they provide a comprehensive and accessible study of a conflict whose consequences will be felt for many years to come.
Rajan Menon is Anne and Bernard Spitzer Professor of Political Science at the Powell School, City College of New York/City University of New York, Senior Research Scholar at the Saltzman Institute of War and Peace Studies, Columbia University, and the author, most recently, of The End of Alliances. He is completing a book on humanitarian intervention and is a regular contributor to nationalinterest.org.

Eugene Rumer is a Senior Associate and Director of the Russia and Eurasia Program at the Carnegie Endowment for International Peace.
“A short and insightful primer that concentrates on the current crisis to give readers a brief but useful introduction to the history of the country.”
—Tim Judah, New York Review of Books

“Rajon Menon and Eugene Rumer complicate the conventional story by providing a thoughtful analysis of the key political, economic, and historical factors that eventually led to the current rupture in Russian-Ukrainian relations.”
—The New Ramble

“Here is a calm, clear alternative to the many emotional efforts to place blame for the crisis in Ukraine on one side alone . . . Menon and Rumer leave no doubt about the boundaries Russia crossed in seizing Crimea and fueling the war in eastern Ukraine, but they do not settle for the common one-dimensional explanation that attributes Russian actions to President Vladimir Putin's alleged imperial fantasies . . . The modest length of the book and its crisp prose complement the efficiency and restraint of the analysis.”
—Foreign Affairs

“ . . . as a piece of desk research, bringing together the hundreds of reports and references that combine to describe the position as it was when the manuscript was finalised, and how that situation came about, the book is nothing short of exemplary.”
—East-West Review