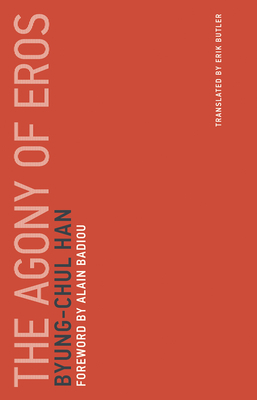 This is book number 1 in the Untimely Meditations series.

An argument that love requires the courage to accept self-negation for the sake of discovering the Other.

Byung-Chul Han is one of the most widely read philosophers in Europe today, a member of the new generation of German thinkers that includes Markus Gabriel and Armen Avanessian. In The Agony of Eros, a bestseller in Germany, Han considers the threat to love and desire in today's society. For Han, love requires the courage to accept self-negation for the sake of discovering the Other. In a world of fetishized individualism and technologically mediated social interaction, it is the Other that is eradicated, not the self. In today's increasingly narcissistic society, we have come to look for love and desire within the “inferno of the same.”

Han offers a survey of the threats to Eros, drawing on a wide range of sources—Lars von Trier's film Melancholia, Wagner's Tristan und Isolde, Fifty Shades of Grey, Michel Foucault (providing a scathing critique of Foucault's valorization of power), Martin Buber, Hegel, Baudrillard, Flaubert, Barthes, Plato, and others. Han considers the “pornographication” of society, and shows how pornography profanes eros; addresses capitalism's leveling of essential differences; and discusses the politics of eros in today's “burnout society.” To be dead to love, Han argues, is to be dead to thought itself.

Concise in its expression but unsparing in its insight, The Agony of Eros is an important and provocative entry in Han's ongoing analysis of contemporary society.

This remarkable essay, an intellectual experience of the first order, affords one of the best ways to gain full awareness of and join in one of the most pressing struggles of the day: the defense, that is to say—as Rimbaud desired it—the “reinvention” of love.
—from the foreword by Alain Badiou

Byung-Chul Han, born in Seoul, is Professor of Philosophy and Cultural Studies at the Universität der Künste Berlin (UdK). One of the most widely read philosophers in Europe, he is the author of more than twenty books, including including four previous volumes in the MIT Press Untimely Meditations series, In the Swarm: Digital Prospects, The Agony of Eros, Shanzhai: Deconstruction in Chinese, and Topology of Violence.

Alain Badiou is a French philosopher. He has published a number of major philosophical works, including The Immanence of Truths, the final installment of his Being and Event trilogy, released in French in 2018.