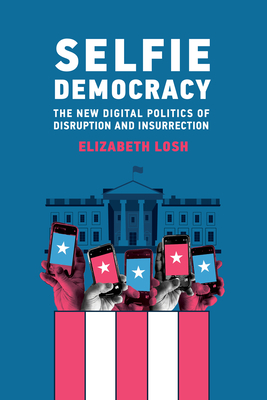 
On Our Shelves Now at:
How politicians’ digital strategies appeal to the same fantasies of digital connection, access, and participation peddled by Silicon Valley.

Smartphones and other digital devices seem to give us a direct line to politicians. But is interacting with presidential tweets really a manifestation of digital democracy? In Selfie Democracy, Elizabeth Losh examines the unintended consequences of politicians’ digital strategies, from the Obama campaign’s pioneering construction of an online community to Trump’s Twitter dominance. She finds that politicians who use digital media appeal to the same fantasies of digital connection, access, and participation peddled by Silicon Valley. Meanwhile, smartphones and social media don’t enable participatory democracy so much as they incentivize citizens to perform attention-getting acts of political expression.

Losh explores presidential rhetoric casting digital media as tools of democracy, describes the conflation of gender and technology that contributed to Hillary Clinton’s defeat in 2016, chronicles the Biden campaign’s early digital stumbles in 2020, and recounts the TikTok campaign that may have spoiled a Trump rally. She shows that although Obama and Trump may seem diametrically opposed in both style and substance, they both used mobile digital media in ways that reshaped the presidency and promised a new kind of digital democracy. Obama used data and digital media to connect to citizens without intermediaries; Trump followed this strategy to its most extreme conclusion. What were the January 6 insurrectionists doing, as they livestreamed themselves and their cohorts attacking the Capitol, but practicing their own brand of selfie democracy?
Elizabeth Losh is Duane A. and Virginia S. Dittman Professor of American Studies and English at William & Mary. She is the author of Virtualpolitik: An Electronic History of Government Media-Making in a Time of War, Scandal, Disaster, Miscommunication, and Mistakes, The War on Learning: Gaining Ground in the Digital University (both published by the MIT Press), and other books.