Where Futures Converge: Kendall Square and the Making of a Global Innovation Hub (Hardcover) 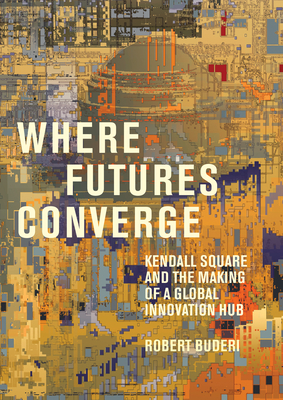 Where Futures Converge: Kendall Square and the Making of a Global Innovation Hub (Hardcover)


Not On Our Shelves—Ships in 1-5 Days
The evolution of the most innovative square mile on the planet: the endless cycles of change and reinvention that created today’s Kendall Square.

Kendall Square in Cambridge, Massachusetts, has been called “the most innovative square mile on the planet.” It’s a life science hub, hosting Biogen, Moderna, Pfizer, Takeda, and others. It’s a major tech center, with Google, Microsoft, IBM, Amazon, Facebook, and Apple all occupying big chunks of pricey office space. Kendall Square also boasts a dense concentration of startups, with leading venture capital firms conveniently located nearby. And of course, MIT is just down the block. In Where Futures Converge, Robert Buderi offers the first detailed account of the unique ecosystem that is Kendall Square, chronicling the endless cycles of change and reinvention that have driven its evolution.

Buderi, who himself has worked in Kendall Square for the past twenty years, tells fascinating stories of great innovators and their innovations that stretch back two centuries. Before biotech and artificial intelligence, there was railroad car innovation, the first long-distance telephone call, the Polaroid camera, MIT’s once secret, now famous Radiation Laboratory, and much more. Buderi takes readers on a walking tour of the square and talks to dozens of innovators, entrepreneurs, urban planners, historians, and others. He considers Kendall Square’s limitations—it’s “gentrification gone rogue,” by one description, with little affordable housing, no pharmacy, and a scarce middle class—and its strengths: the “human collisions” that spur innovation.

What’s next for Kendall Square? Buderi speculates about the next big innovative enterprises and outlines lessons for aspiring innovation districts. More important, he asks how Kendall Square can be both an innovation hub and diversity, equity, and inclusion hub. There’s a lot of work still to do.

Robert Buderi is an author, journalist, and entrepreneur. He is the author of Engines of Tomorrow, The Invention That Changed the World, and other books, former Editor-in-Chief of Technology Review, and founder of the media company Xconomy.
“Where Futures Converge: Kendall Square and the Making of a Global Innovation Hub by Robert Buderi (MIT Press) is a biogeography of the area, a compelling history of the place, and a lively portrait of what it is today. He treats the area as an ecosystem, one that’s in constant flux...He talks with professors, entrepreneurs, members of the Kendall Square Association, historians, scientists, in trying to understand what makes the place what it is, as well as the challenges it faces: it has some of the highest rent in the country, people can’t afford to live there, it’s dead in the evenings and on weekends, lowering the opportunity for serendipitous encounters that lead to bigger brainstorms and even more fresh ideas. And he looks towards what’s possible in Kendall Square’s future, making stronger links between the science and the humanities, and continuing to change the ways the world approaches climate change, medicine, energy, transportation, and tech. It’s not only a look the biotech jungle, but a history of some of the most important developments in the last century."
—The Boston Globe

"Where Futures Converge dives into the dynamics that make Kendall Square such a powerful engine of scientific breakthroughs and startup formation."
—The Boston Globe

"Kendall Square in Cambridge, Massachusetts, has been dubbed 'the most innovative square mile on earth.'  Neighbouring the Massachusetts Institute of Technology, it is a centre for life-sciences companies, tech firms and start-ups, from Moderna to IBM. One building with a history including the first long-distance telephone call now houses almost 70 biomedical start-ups. Entrepreneur and Kendall Square inhabitant Robert Buderi considers the area’s past, present and future by interviewing local notables."
—Nature

“The book works as a narrative history—well researched and filled to the brim with local voices and anecdotes…Within the pages of his new book, Buderi takes readers on a journey through the timeline, making important milestones. A page-turner.”
—Boston Common Magazine

"In Where Futures Converge, Kendall Square and the Making of a Global Innovation Hub, Robert Buderi, a well-known business and technology writer, tells the story of the movers and shakers, the policymakers and planners, and the places and events that shaped the region’s knowledge economy. He offers a fascinating account of the history of innovation in Kendall Square, which is at the confluence of world-class research institutes, academia and hospitals, all within walking distance of each other...The future of Kendall Square is again rife with possibilities. Now is a good time to pick up this informative and lovingly written book."
—Frontline, India's National Magazine