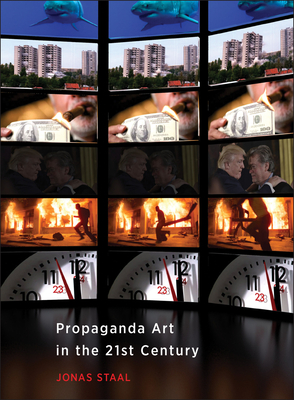 
Not On Our Shelves—Ships in 1-5 Days
How to understand propaganda art in the post-truth era—and how to create a new kind of emancipatory propaganda art.

Propaganda art—whether a depiction of joyous workers in the style of socialist realism or a film directed by Steve Bannon—delivers a message. But, as Jonas Staal argues in this illuminating and timely book, propaganda does not merely make a political point; it aims to construct reality itself. Political regimes have shaped our world according to their interests and ideology; today, popular mass movements push back by constructing other worlds with their own propagandas. In Propaganda Art in the 21st Century, Staal offers an essential guide for understanding propaganda art in the post-truth era.

Staal shows that propaganda is not a relic of a totalitarian past but occurs today even in liberal democracies. He considers different historical forms of propaganda art, from avant-garde to totalitarian and modernist, and he investigates the us versus them dichotomy promoted in War on Terror propaganda art—describing, among other things, a fictional scenario from the Department of Homeland Security, acted out in real time, and military training via videogame. He discusses artistic and cultural productions developed by such popular mass movements of the twenty-first century as the Occupy, activism by and in support of undocumented migrants and refugees, and struggles for liberation in such countries as Mali and Syria.

Staal, both a scholar of propaganda and a self-described propaganda artist, proposes a new model of emancipatory propaganda art—one that acknowledges the relation between art and power and takes both an aesthetic and a political position in the practice of world-making.

Jonas Staal is an artist and founder of New World Summit, an artistic and political organization that develops parliaments with and for stateless, blacklisted, and autonomist organizations. Recent publications include Nosso Lar, Brasília. His artwork has been exhibited at venues including the 7th Berlin Biennale, the Stedelijk Museum in Amsterdam, the Victoria and Albert Museum in London, and the 31st São Paulo Biennale.