The Blockchain and the New Architecture of Trust (Information Policy) (Hardcover) 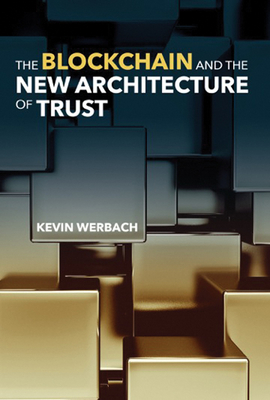 The Blockchain and the New Architecture of Trust (Information Policy) (Hardcover)

The blockchain entered the world on January 3, 2009, introducing an innovative new trust architecture: an environment in which users trust a system—for example, a shared ledger of information—without necessarily trusting any of its components. The cryptocurrency Bitcoin is the most famous implementation of the blockchain, but hundreds of other companies have been founded and billions of dollars have been invested in similar applications since Bitcoin’s launch. Some see the blockchain as offering more opportunities for criminal behavior than benefits to society. In this book, Kevin Werbach shows how a technology resting on foundations of mutual mistrust can become trustworthy.

The blockchain, built on open software and decentralized foundations that allow anyone to participate, seems like a threat to any form of regulation. In fact, Werbach argues, law and the blockchain need each other. Blockchain systems that ignore law and governance are likely to fail, or to become outlaw technologies irrelevant to the mainstream economy. That, Werbach cautions, would be a tragic waste of potential. If, however, we recognize the blockchain as a kind of legal technology that shapes behavior in new ways, it can be harnessed to create tremendous business and social value.
Kevin Werbach is Professor of Legal Studies and Business Ethics at the Wharton School of the University of Pennsylvania. Founder of the technology consulting firm Supernova Group, he has advised the FCC and Department of Commerce on communication policy. He is the coauthor of For the Win: How Game Thinking Can Revolutionize Your Business.
However, Werbach argues, the most significant innovation of blockchain is not governmental or even technological but emotional: the creation of 'a new form of trust,' in which you put your confidence in a store of information without relying on any single person to authenticate it — trust the system, not its parts. The outstanding question is whether this method of cultivating trust is viable, and if it is, in what ways we can best deploy it. The answers we come up with are likely to determine blockchain's future.—New York Times Book Review—