The Politics of Crisis-Making: Forced Displacement and Cultures of Assistance in Lebanon (Hardcover) 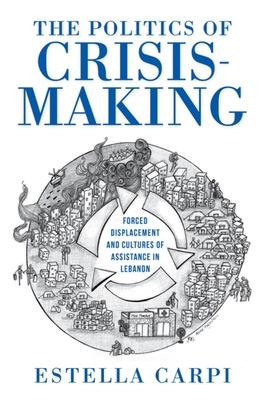 The Politics of Crisis-Making: Forced Displacement and Cultures of Assistance in Lebanon (Hardcover)

Traditionally, humanitarianism is considered a nonpolitical urgent response to human suffering. However, this characterization ignores the politics that create and are created by the crises and the increasingly long-term dimension of relief.

In The Politics of Crisis-Making, by shedding light on how humanitarian practice becomes enmeshed with diverse forms of welfare and development, Estella Carpi exposes how the politics of defining crises affect the social identity and membership of the displaced. Her ethnographic research in Lebanon brings to light interactions among aid workers, government officials, internally displaced citizens, migrants, and refugees after the 2006 war in Beirut's southern suburbs and during the 2011-2013 arrival of refugees from Syria to the Akkar District (northern Lebanon). By documenting different cultures, modalities, and traditions of assistance, Carpi offers a full account of how the politics of crisis-making play out in Lebanon.

An important read, The Politics of Crisis-Making shows that it is not crisis per se, but rather the crisis as official discourse and management that are able to reshuffle societies, while engendering unequal political, moral, and nationality-based economies.