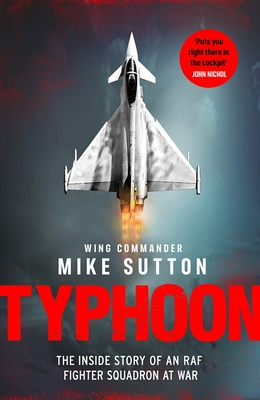 
Special Order—Subject to Availability
In 2016, the RAF's Typhoon deployed to the Middle East for the first time.

Flying a heavily armed, state-of-the-art supersonic multi-role jet, the RAF's Top Gun pilots knew the slightest error in their pinpoint strikes could have fatal consequences, and faced ever-present threat from hi-tech surface-to-air missiles. For their boss, Wing Commander Mike Sutton, the sadistic murder of an allied pilot shot down over the battleground was never far from his thoughts.

A gripping and dramatic story of modern warfare, Typhoon puts the reader into the cockpit like never before. Strap in, light the afterburners, and hold on tight...
Mike Sutton led 1(Fighter) Squadron into action against ISIS in 2015. An RAF fighter pilot for 18 years, he flew the Jaguar strike jet before becoming an instructor on the first RAF Typhoon multi-role attack squadron. During his time as a tactics instructor he conducted a live scramble in response to a potential terrorist hijacking and served on operations in Afghanistan, Iraq and Syria. He left the RAF as a Wing Commander aged 39, and now flies commercially providing operational readiness training for the UK armed forces. He was awarded the OBE in 2017.