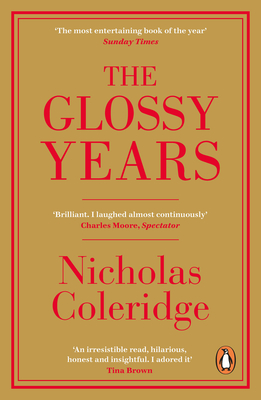 Diana touched your elbow, your arm, covered your hand with hers. It was alluring. And she was disarmingly confiding. "Can I ask you something? Nicholas, please be frank . . ." Over his 30-year career at Condé Nast, Nicholas Coleridge has witnessed it all. From the anxieties of the Princess of Wales to the blazing fury of Mohamed Al-Fayed, his story is also the story of the people who populate the glamorous world of glossy magazines. With relish and astonishing candor, he offers the inside scoop on Tina Brown and Anna Wintour, David Bowie and Philip Green, Kate Moss and Beyonce; on Margaret Thatcher's clothes legacy, and a surreal weekend away with Bob Geldof and William Hague. Cara Delevingne, media tycoons, Prime Ministers, Princes, Mayors and Maharajas all cross his path. His career in magazines straddles the glossies throughout their glorious zenith—from the 1970s, 1980s and 1990s to the digital iterations of the 21st century. Having cut his teeth on Tatler, and as Editor-in-Chief of Harpers & Queen, he became the Mr Big of glossy publishing for three decades. Packed with surprising and often hilarious anecdotes, The Glossy Years also provides perceptive insight into the changing and treacherous worlds of fashion, journalism, museums and a whole sweep of British society.

Nicholas Coleridge has been Managing Director of British Condé Nast and President of Condé Nast International, publisher of 130 magazines around the world, including Vogue and Vanity Fair. Journalist, editor, magazine executive, author, environmental campaigner, and Chairman of the Victoria and Albert Museum and British Fashion Council, he has for three decades been a prevalent figure in the publishing and fashion industries. His novels include A Much Married Man and Godchildren.
"I adored it. Coleridge has a Waugh-like eye for hilarious social nuance and a Henry Jamesian ear for precision. He is both self-deprecating and shrewd as he regales us with his rollicking ride as editor and tastemaker in the world of British glossy magazines: an irresistible read." —Tina Brown

"The most entertaining book of the year." —Sunday Times

"Coleridge is a witty writer . . . reading this book is like sitting next to a sharp but generous-hearted raconteur at dinner." —Mail on Sunday

"Has bounding vitality, glorious zest and and an uplifting generosity of spirit. It is always playful, sometimes hilarious—but above all it is wise." —Literary Review

"Gentle, jolly . . . Blissfully funny . . . One might wish to make people as happy, personally and professionally, as Coleridge has done - and will continue to do with this amusing book." —Sunday Telegraph

"Forthright, witty and gossipy . . . a passion for glossy magazines shines through this effervescent memoir." —Mail on Sunday

"Beady and slyly funny, my favourite bit concerns punctuation in the late Betty Kenward's society column. It's that kind of book." —Sunday Times