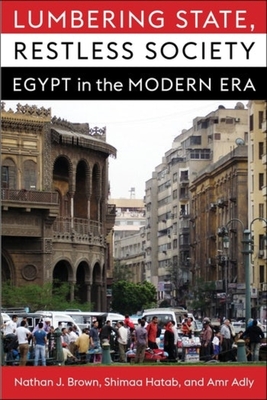 
Not On Our Shelves—Ships in 1-5 Days
Lumbering State, Restless Society offers a comprehensive and compelling understanding of modern Egypt. Nathan J. Brown, Shimaa Hatab, and Amr Adly guide readers through crucial developments in Egyptian politics, society, and economics from the middle of the twentieth century through the present. Integrating diverse perspectives and areas of expertise, including the tools of comparative politics, the book provides an accessible and clear introduction to the Egypt of today alongside an innovative and rigorous analysis of the country's history and governance. Brown, Hatab, and Adly highlight ways in which Egypt resembles other societies around the world, drawing from and contributing to broader debates in political science. They trace the emergence of a powerful and intrusive state alongside a society that is increasingly politicized, and they emphasize how the rulers and regimes who have built and steered the state apparatus have also had to retreat and recalibrate. The authors also examine why authoritarianism, corporatism, and socialism have decayed without resulting in a liberal democratic order, and they show why Egyptian politics should not be understood in terms of a single dominant force but rather an interplay among many actors. At once current, insightful, and engaging, Lumbering State, Restless Society delivers a powerful and distinctive account of modern Egypt in the modern world.
Nathan J. Brown is professor of political science and international affairs at George Washington University. His books include Arguing Islam After the Revival of Arab Politics (2017). Shimaa Hatab is assistant professor of political science at Cairo University. Her work has appeared in journals such as Comparative Politics and Democratization. Amr Adly is assistant professor of political science at the American University in Cairo. He is the author of Cleft Capitalism: The Social Origins of Failed Market Making in Egypt (2020).