Enemies Near and Far: How Jihadist Groups Strategize, Plot, and Learn (Columbia Studies in Terrorism and Irregular Warfare) (Paperback) 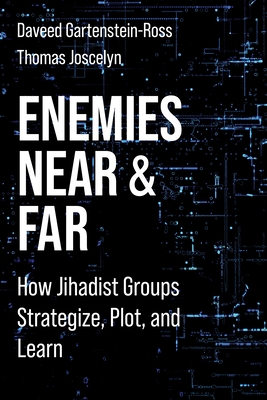 Enemies Near and Far: How Jihadist Groups Strategize, Plot, and Learn (Columbia Studies in Terrorism and Irregular Warfare) (Paperback)


In Stock—Click for Locations
Although the United States has prioritized its fight against militant groups for two decades, the transnational jihadist movement has proved surprisingly resilient and adaptable. Many analysts and practitioners have underestimated these militant organizations, viewing them as unsophisticated or unchanging despite the ongoing evolution of their tactics and strategies. In Enemies Near and Far, two internationally recognized experts use newly available documents from al-Qaeda and ISIS to explain how jihadist groups think, grow, and adapt. Daveed Gartenstein-Ross and Thomas Joscelyn recast militant groups as learning organizations, detailing their embrace of strategic, tactical, and technological innovation. Drawing on theories of organizational learning, they provide a sweeping account of these groups' experimentation over time. Gartenstein-Ross and Joscelyn shed light on militant groups' most effective strategic and tactical moves, including attacks targeting aircraft and the use of the internet to inspire and direct lone attackers, and they examine jihadists' ability to shift their strategy based on political context. While militant groups' initial efforts to upgrade their capabilities often fail, these attempts should generally be understood not as failures but as experiments in service of a learning process--a process that continues until these groups achieve a breakthrough. Providing unprecedented historical and strategic perspective on how jihadist groups learn and evolve, Enemies Near and Far also explores how to anticipate future threats, analyzing how militants are likely to deploy a range of emerging technologies.
Daveed Gartenstein-Ross is the founder and chief executive officer of Valens Global, a senior adviser at the Foundation for Defense of Democracies, and an associate fellow at the International Centre for Counter-Terrorism--The Hague. His books include My Year Inside Radical Islam: A Memoir (2007), and he has led numerous policy projects, including serving as the lead drafter of the U.S. Department of Homeland Security's 2019 Strategic Framework for Countering Terrorism and Targeted Violence. Thomas Joscelyn is a senior fellow at the Foundation for Defense of Democracies, where he is also senior editor of the Long War Journal. He has served as a consultant for the FBI's Counterterrorism Division.