The Legacies of Transition Governments in Africa: The Cases of Benin and Togo (Hardcover) 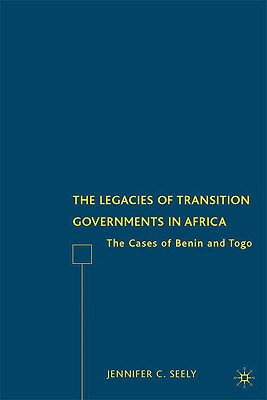 The Legacies of Transition Governments in Africa: The Cases of Benin and Togo (Hardcover)


Not On Our Shelves—Ships in 1-5 Days
The revolutionary political upheavals in Africa in the early 1990s continue to have an impact almost two decades later. This book argues we must look to the defining period of transition to understand how politics in these countries changed since the fall of dictatorial one-party states.
JENNIFER C. SEELY is an Assistant Professor in the Politics Department at Earlham College, USA.

“There is much in this project – particularly the focus on transition bargaining among political actors – that could help to advance our understanding of democratization in Africa and around the world. Jennifer Seely unites insights from the two literatures, namely, the pact-making view that the process matters and the path-dependency view that structures are difficult to change. She also has deep country knowledge of the two cases. It is rare to find this kind of extensive use of interviews.”—Leonardo Arriola, Assistant Professor of Political Science, UC Berkeley

"Professor Seely gives us a powerful set of analytic and empirical tools with which to understand the democratic transitions of the 1990s and their consequences. I could not be more pleased with this excellent study."—Victor T. LeVine, Professor Emeritus, Department of Political Science, Washington University