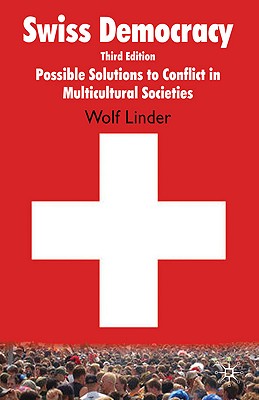 
Not On Our Shelves—Ships in 1-5 Days
An updated 3rd edition of this authoritative analysis of Swiss democracy, the institutions of federalism, and consensus democracy through political power sharing. Linder analyzes the scope and limits of citizens' participation in direct democracy, which distinguishes Switzerland from most parliamentary systems.

WOLF LINDER is Professor Emeritus of Political Science and former Director of the Institute of Political Science at the University of Bern, Switzerland. His main research field is Swiss politics. Linder worked as an expert for national and international agencies in developing countries for questions of institutional power sharing, federalism and decentralization.

Reviews of the Second Edition:

"The real value of the book lies in its critical dissection of features of Swiss democracy that are frequently praised in theory but rarely assessed in practice. Linder shows that behind its apparent populist democracy lurks the power of interest groups. So he makes a contribution to thought about democracy which could have significant lessons for countries seeking to be democratic." -- G.W. Jones, Professor of Government, London School of Economics, University of London, UK

"Linder is not the first author trying to explain the Swiss system to foreigners. But he uniquely combines three features: a sound and comprehensive scientific bse, the personal competence of combining theoretical knowledge with the insights of practical political life, and the ability to ask critical questions on the way Swiss institutions work" --Rene Levy, Professor of Sociology, University of Lausanne, Switzerland

"Wolf Linder's Swiss Democracy blends theoretical analysis with descriptive facility so as to present a vivid portrait of what is distinctive about the Swiss political system. It poses original questions which students are encouraged to ponder in comparative perspective to other systems." --Arnold J. Heidenheimer, Professor of Political Science, Washington University