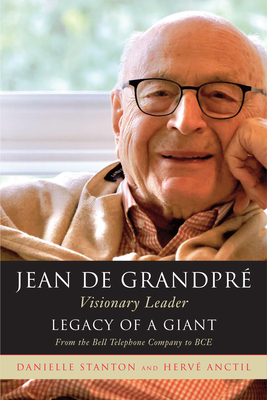 
Special Order—Subject to Availability
Visionary leader and businessman Jean de Grandpré has earned many nicknames: he is known variously as the Simplifier, the Architect, and the Strategist. A lawyer when he joined Bell Canada in 1966, he went on to build a telecommunications empire that spanned the continent, crossing paths with politicians, moguls, and philanthropists along the way. Beginning as Bell’s general counsel, de Grandpré quickly rose through the corporate ranks and became president in 1973. A few years later he created Bell Canada Enterprises, one of America’s largest telecommunications companies. A globally recognized manager and director, he has served on the boards of numerous companies, both in Canada and abroad. As generous as he is discreet, he is involved with several charities, including the Papillon Foundation, which helps disabled children. At McGill University, his alma mater, De Grandpré served as chancellor from 1984 to 1991 and is now governor emeritus and chancellor emeritus. Danielle Stanton and Hervé Anctil retrace the admirable career of this influential man whose life has spanned a century. Offering insight into the secrets of his success, Jean de Grandpré will inspire new generations of entrepreneurs.
Danielle Stanton is a freelance journalist who has written for L’actualité, Elle Québec, Châtelaine, and L’Express. She lives in Quebec City. Hervé Anctil is a specialized writer, journalist, and author. He lives in Quebec City.
“I salute and celebrate the special leadership Jean de Grandpré has given to the people of Quebec, the people of Canada, and our McGill family. His deep roots and dedication have directly contributed to the evolution of our country.” The Right Honourable David L. Johnston

“This book traces the professional, human, and philanthropic journey of a great Canadian. Jean de Grandpré was at the forefront of the builders of corporate Canada as we know it today. He offers a phenomenal blend of leadership, practical wisdom, and generosity to others. A humanist, his quest has always been to help others by guiding, directing, or supporting them. His legacy is immense.” Jean Duchesneau, Camp Papillon Foundation

“Jean de Grandpré is a role model for many entrepreneurs of my generation and showed us the essential qualities of a true leader.” Serge Godin, CGI

“The Neuro is fortunate to have had Jean de Grandpré's support and counsel for so many years. Not only did he shine a spotlight on the Neuro and many other important causes, but throughout his career he reminded us that being active and engaged in society has virtue in its own right.” Guy Rouleau, Montreal Neurological Institute-Hospital

“Jean de Grandpré was a strategic leader for Bell, transforming the company to become the enduring Canadian fixture that we are today.” Mirko Bibic, BCE and Bell Canada