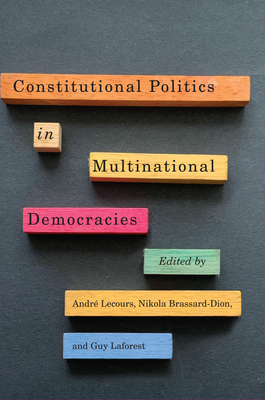 
Special Order—Subject to Availability
Constitutional politics is exceptionally intense and unpredictable. It involves negotiations over the very nature of the state and the implications of self- determination. Multinational democracies face pressing challenges to the existing order because they are composed of communities with distinct cultures, histories, and aspirations, striving to coexist under mutually agreed-upon terms. Conflict over the recognition of these multiple identities and the distribution of power and resources is inevitable and, indeed, part of what defines democratic life in multinational societies. In Constitutional Politics in Multinational Democracies André Lecours, Nikola Brassard-Dion, and Guy Laforest bring together experts on multinational democracies to analyze the claims of minority nations about their political future and the responses they elicit through constitutional politics. Essays focus on the nature of these states and the actors and political process within them. This framework allows for a multidimensional examination of crucial political periods in these democracies by assessing what constitutional politics is, who is involved in it, and how it happens. Case studies include Catalonia and Spain, Puerto Rico and the United States, Scotland and the United Kingdom, Belgium, Bosnia and Herzegovina, and Quebec and the Métis People in Canada. Theoretically significant and empirically rich, Constitutional Politics in Multinational Democracies is a necessary read for any student of multinationalism.
André Lecours is full professor in the School of Political Studies at the University of Ottawa. Nikola Brassard-Dion is a member of the Centre on Governance at the University of Ottawa. Guy Laforest is executive director of the École nationale d'administration publique.
"As embodiments of a shared political community, constitutions specify the rules of the game and the boundaries for legal political action. But what happens when some groups feel they do not fully belong in said community? How can constitutions accommodate minorities – and can they provide mechanisms for an amicable divorce? These issues have been at the forefront of politics in countries like Canada, Spain, and the United Kingdom. Constitutional Politics in Multinational Democracies brings together the foremost experts in the field and provides answers to these pressing questions. Highly recommended!" Matt Qvortrup, Coventry University

"Constitutional Politics in Multinational Democracies is a valuable book that considers the dynamics of these countries at a critical juncture. The book helps us better understand the friction between legality (formal structure) and legitimacy (political practice) and the extent to which party politics and social pressures push formal structures into adjustment." Wilfried Swenden, University of Edinburgh