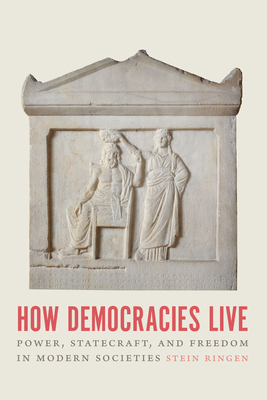 
In Stock—Click for Locations
Times have not been kind to democracy. This book is in its defense.

In the new century, the triumph of democracy at the end of the Cold War turned to retrenchment. The core democracies, in America and Britain, succumbed to polarization and misrule. Dictatorships, such as China, made themselves assertive. New democracies in Central Europe turned to muddled ideologies of “illiberal democracy.” In this book, Stein Ringen offers a meditation on what democracy is, the challenges it faces, and how it can be defended. Ringen argues that democracy must be rooted in a culture that supports the ability of citizens to exchange views and information among themselves and with their rulers.

Drawing on the ideas of Machiavelli, Aristotle, Tocqueville, Max Weber, and others, Ringen shows how power is the fuel of government, and statecraft turns power into effective rule. Democracy should prize freedom and minimizing unfairness, especially poverty. Altogether, Ringen offers powerful insight on the meaning of democracy, including a new definition, and how countries can improve upon it and make it function more effectively. Timely and thought-provoking, How Democracies Live is a sober reminder of the majesty of the democratic enterprise.
Stein Ringen is emeritus professor at Green Templeton College, University of Oxford and visiting professor of political economy at King’s College, London.
“In our era of democratic decline, Ringen returns to the great thinkers for a series of clear-eyed explorations about how to restore our systems of governance.?A truly important book for dangerous times.”
— Tom Ginsburg, University of Chicago

“A sober and passionate defense of representative democracy as humanity’s best hope for self-government. Chock full of recommendations for repair of the public culture on which effective government depends. The hard case for democracy for unsentimental realists.”
— Joel Rogers, University of Wisconsin–Madison

“Ringen opens an erudite and accessible conversation about governance. The power of his bracing analysis of democracy—its value and what imperils it—sneaks up on you, and by the end, you’ll have thought seriously about the things that matter most for the state of contemporary democracy.
— Mark Tushnet, Harvard Law School

“Starting with the essential role of government in providing for security and protection, Ringen shows how only representative democracy can deal with the realities of power. If you despaired of finding a work that showed how progressive policy can be rooted in a hard-headed assessment of democracy, this is the book for you.”
— Albert Weale, University College London

“With artful and flowing prose, Ringen engages readers in a compelling conversation about the nature of democracy, its current malaise, and future prospects.? He argues, convincingly, that the key to salvaging democracy today is reconstructing its cultural foundations. This daunting task falls primarily on the shoulders of far-sighted leaders.”
— Maurizio Ferrera, Università degli Studi di Milano Statale

"More than any, this book from the 76-year-old author, an accomplished scholar of governance, is a much-needed critique of what he calls the 'detached cynicism' of the death-of-democracy literature. His delightful prose is a feather in the cap of this unsentimental exploration of a hot topic."
— Open Magazine