A Political Economy of Justice (Paperback) 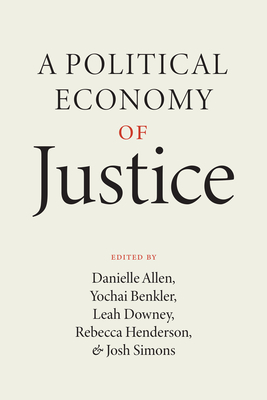 A Political Economy of Justice (Paperback)


In Stock—Click for Locations
Defining a just economy in a tenuous social-political time.

If we can agree that our current social-political moment is tenuous and unsustainable—and indeed, that may be the only thing we can agree on right now—then how do markets, governments, and people interact in this next era of the world? A Political Economy of Justice considers the strained state of our political economy in terms of where it can go from here. The contributors to this timely and essential volume look squarely at how normative and positive questions about political economy interact with each other—and from that beginning, how to chart a way forward to a just economy.

A Political Economy of Justice collects fourteen essays from prominent scholars across the social sciences, each writing in one of three lanes: the measures of a just political economy; the role of firms; and the roles of institutions and governments. The result is a wholly original and urgent new benchmark for the next stage of our democracy.
Danielle Allen is the James Bryant Conant University Professor at Harvard University, where she is also the principal investigator for the Democratic Knowledge Project. She was a recipient of a MacArthur fellowship in 2001 and was elected to the American Academy of Arts and Sciences in 2009. In 2020, she won the Kluge Prize for Achievement in the Study of Humanity, administered by the Library of Congress, that recognizes work in disciplines not covered by the Nobel Prizes. She is the author or coeditor of many books, including Our Declaration: A Reading of the Declaration of Independence in Defense of Equality.

Yochai Benkler is the Berkman Professor of Entrepreneurial Legal Studies at Harvard Law School and faculty co-director of the Berkman Klein Center for Internet and Society at Harvard University.

Leah Downey is a PhD candidate in government at Harvard University and a visiting academic at the Sheffield Political Economy Research Institute.

Rebecca Henderson is the John and Natty McArthur University Professor at Harvard University, a research fellow at the National Bureau of Economic Research, and a fellow of both the British Academy and of the American Academy of Arts and Sciences.

Josh Simons is a postdoctoral fellow in technology and democracy at the Edmond J. Safra Centre for Ethics at Harvard University.
Despite polarized attitudes, Rebecca Henderson argues that it's the perfect time for companies to reset their moral compass. In an essay from the book A Political Economy of Justice, she explores the social efforts of Cadbury and Unilever. Henderson says companies and societies have long had qualms about the pursuit of profit only for profit’s sake. In early capitalist Renaissance Italy, for instance, lending money was considered a sin. Plus, she points to Walmart, founded in 1962 with a mission of making consumer goods more affordable for a broader swath of low-income Americans. Her chapter, “Reimagining Capitalism: Could Purpose-Driven Firms Help to Build a Just and Sustainable World?” also explores corporate partnerships that support social good, such as one that Unilever pioneered to unite a group of companies to sustainably produce palm oil.
— Harvard Business School Working Knowledge