Power in the Wild: The Subtle and Not-So-Subtle Ways Animals Strive for Control over Others (Hardcover) 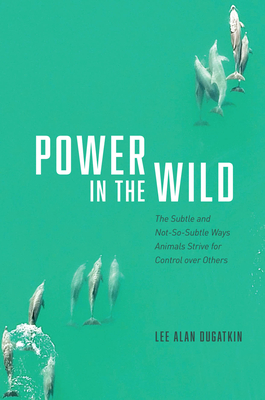 Power in the Wild: The Subtle and Not-So-Subtle Ways Animals Strive for Control over Others (Hardcover)


On Our Shelves Now at:
From the shell wars of hermit crabs to little blue penguins spying on potential rivals, power struggles in the animal kingdom are as diverse as they are fascinating, and this book illuminates their surprising range and connections.

The quest for power in animals is so much richer, so much more nuanced than who wins what knock-down, drag-out fight. Indeed, power struggles among animals often look more like an opera than a boxing match. Tracing the path to power for over thirty different species on six continents, writer and behavioral ecologist Lee Alan Dugatkin takes us on a journey around the globe, shepherded by leading researchers who have discovered that in everything from hyenas to dolphins, bonobos to field mice, cichlid fish to cuttlefish, copperhead snakes to ravens, and meerkats to mongooses, power revolves around spying, deception, manipulation, forming and breaking up alliances, complex assessments of potential opponents, building social networks, and more. Power pervades every aspect of the social life of animals: what they eat, where they eat, where they live, whom they mate with, how many offspring they produce, whom they join forces with, and whom they work to depose. In some species, power can even change an animal’s sex. Nor are humans invulnerable to this magnificently intricate melodrama: Dugatkin’s tales of the researchers studying power in animals are full of unexpected pitfalls, twists and turns, serendipity, and the pure joy of scientific discovery.

Lee Alan Dugatkin is an animal behaviorist, evolutionary biologist, and historian of science in the Department of Biology at the University of Louisville. He is the author of more than one hundred and fifty papers and the author or coauthor of many books, including The Altruism Equation: Seven Scientists Search for the Origins of Goodness.

"A scrupulously scientific but highly accessible tour of power’s manifestations among caribou, bonobos, deer, dolphins, hyenas, meerkats, mice, mongooses (mongeese?)—and those are just some of the mammals. . . . Readable and intellectually satisfying. . . . Compact but very gratifying. . . . True to its title, Power in the Wild doesn’t address Homo sapiens. But the anthropocentrically inclined will find that the power dynamics of nonhuman animals offer plenty of insight into our own, distorted a bit as in a funhouse mirror. For the open-minded, Dugatkin’s depiction of power in the wild yields a stunningly provocative reflection."
— David P. Barash

“Power in the Wild, by behavioral ecologist Dugatkin, reveals the realpolitik behind the lives of sweet-looking creatures from meerkats to field mice, as he examines the eternal struggle for dominance in nature.”
— New Scientist, "Don't Miss"

"While visiting a wolf research park in Austria, animal behaviorist Dugatkin was startled to see one male sitting on top of another, clamping its snout in its jaws. The park’s director assured him there was no harm involved, only a display of power. This theme defines Dugatkin’s engaging book, which is based on the work of many scientists with a huge range of animals from around the world, including baboons, dolphins, mongooses and ravens. 'Power pervades every aspect of the social lives of animals,' he says."
— Andrew Robinson

"From ants to cuttlefish to wolves, this entertaining book surveys various species’ strategies for maintaining control. . . . Dugatkin’s snappy prose enlivens his evolutionary explanations, as of a discussion of how new technology aids in data collection. He is deliberate about highlighting the work of women researchers. Power in the Wild is a charming tour through the wonderful, sometimes bizarre realities of animal behavior."
— Foreword Reviews

"Power struggles in the animal kingdom are still not entirely understood, not least when they take place in many more arenas and forms than the most obvious one of physical conflict. Spying, deception, manipulation, shifting social networks—all these are covered here. The author looks at more than thirty species across six continents."
— Bookseller

"This captivating, illuminating, and timely book explores how power is sought, attained, maintained, and transferred in nonhuman animal societies... This colorful journey through the deep evolutionary roots of power structures and the complex paths to higher social status will inspire behavioral scientists across disciplines, including ethologists, psychologists, and anthropologists, as well as adult readers with particular interest in animal behaviors... Highly recommended."
— Choice

"Like cooperation, competition in the nonhuman world takes many forms. In Power in the Wild, biologist and science historian Dugatkin shows that strength and ruthlessness are only two of the many possible assets an organism may bring to a contest... Aided by new theories and, in many cases, new technologies and techniques, researchers are untangling the influences of genetics, hormone levels, and habitat on such behaviors, and investigating how changes in these and other factors may shift power dynamics over lifetimes and generations. As they do so, they uncover even more complexity in communities long assumed to be far simpler than ours. While Dugatkin's book is not about power in human communities, he is alert to the entrenched inequalities in science and makes a commendable effort to ensure that a large proportion of the voices in his book belong to women, younger scientists, and others too often denied full credit for their work."
— Sierra

“Timely and fascinating. . . . Dugatkin’s book is great food for thought regarding the nature of power, equality, and equity, the origins of justice and the origins of sociality in animals—including our own species.”
— Sheng-Feng Shen, Biodiversity Research Center, Academia Sinica, Taipei, Taiwan

"It would have been easy for Dugatkin, given the scope of his book, to get bogged down in numbers, names, and details, producing a litany of 'gee whiz' facts without any connecting thread. . . . Yet, on the whole, he manages to balance scientific specificity with linguistic flourishes and descriptive details that kept me immersed. . . . Dugatkin's respect for the researchers behind the science also keeps the story moving. The book is as much a profile of them and their endeavors as the animals they study. . . . One of the real joys of the book, though, is Dugatkin's enthusiasm about the subject.”
— Leah Campbell

“A brilliant journey into the intricate dramas of animal behavior and evolution. Along the way, we also see the scientific process in vivid light, a wonderful exposition of how to deepen understanding of the living world.”
— David George Haskell, Sewanee: The University of the South, author of Pulitzer finalist "The Forest Unseen" and Burroughs medalist "The Songs of Trees"

“Power, and the way it is won and lost, unites angelfish and weaverbirds, ravens and cockroaches. By revealing its stunning variety in nature, Dugatkin shows how power isn’t necessarily abusive, or ugly—it’s simply a fact of life. From confrontation to espionage, with coalitions formed and dissolved, his absorbing stories explore how animals juggle their relationships and play a long game.”
— Marlene Zuk, Regents Professor of Ecology, Evolution, and Behavior, University of Minnesota, author of "Paleofantasy" and "Sex on Six Legs"

“Entertaining anecdotes and scholarly science effortlessly entwine in this delightfully raucous romp through decades of research on the nature of power in the animal kingdom. A great read whether you’re a student, scientist, or amateur animal behavior enthusiast.”
— Athena Aktipis, Arizona State University, author of "The Cheating Cell"

“‘Biology’ means ‘the study of life,’ and it requires the story of life. Admirers of Dugatkin’s acclaimed books such as How to Tame a Fox (and Build a Dog) know that he tells rousing stories about nature and how scientists decipher its mysteries. There could not be a more pervasive aspect of life than power dynamics, nor one that more greatly influences nature’s slow change over time. For fans of both science writing and nature writing, Power in the Wild teems with enough animals and scientists around the world to satisfy David Attenborough—whose urbane narration comes to mind as one enlightening glimpse of nature follows another in this lucid and lively celebration of nature's diversity.”
— Michael Sims, author of "Adam’s Navel" and "The Adventures of Henry Thoreau"