The Struggle for Inclusion: Muslim Minorities and the Democratic Ethos (Hardcover) 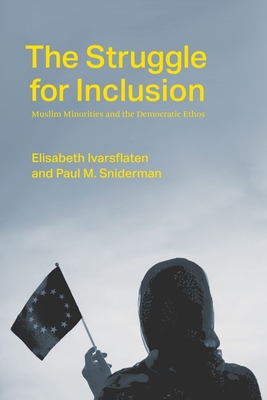 The Struggle for Inclusion: Muslim Minorities and the Democratic Ethos (Hardcover)


Not On Our Shelves—Ships in 1-5 Days
The politics of inclusion is about more than hate, exclusion, and discrimination.  It is a window into the moral character of contemporary liberal democracies.  The Struggle for Inclusion introduces a new method to the study of public opinion: to probe, step by step, how far non-Muslim majorities are willing to be inclusive, where they draw the line, and why they draw it there and not elsewhere.  Those committed to liberal democratic values and their concerns are the focus, not those advocating exclusion and intolerance.

Notwithstanding the turbulence and violence of the last decade over issues of immigration and of Muslims in the West, the results of this study demonstrate that the largest number of citizens in contemporary liberal democracies are more open to inclusion of Muslims than has been recognized. Not less important, the book reveals limits on inclusion that follow from the friction between liberal democratic values.  This pioneering work thus brings to light both pathways to progress and polarization traps.

Elisabeth Ivarsflaten is professor of political science and scientific director of the Digital Social Science Core Facility at the University of Bergen, Norway.

Paul M. Sniderman is the Fairleigh S. Dickinson Jr., Professor of Public Policy at Stanford University and a fellow of the American Academy of Arts and Sciences.  He is, most recently, author of The Democratic Faith and coauthor of Paradoxes of Liberal Democracy: Islam, Western Europe and the Danish Cartoon Crisis.
“The Struggle for Inclusion charts an evidence-based strategy for winning over a potentially inclusive non-Muslim majority in Western European countries. Rather than intervene in an attempt to change attitudes about Muslims, the authors search for hidden tolerant majorities by exploring the conditions under which survey respondents from seven countries express tolerant views. A meticulously crafted series of survey experiments shows how acceptance of Muslims changes, sometimes dramatically, depending on the substantive concerns at issue.”
— Donald P. Green, Columbia University

“The key point of the book is that we should cease to focus on the intolerant and instead focus on the tolerant who are in favor of including Muslim minorities. In so doing, we should take into account that the terms of inclusion matter for them. In a series of impressive survey experiments, the authors demonstrate this key point in a highly effective manner. Without any doubt, this book makes an important contribution to the literature on attitudes about immigration, tolerance, liberal values, and their political implications.”
— Hanspeter Kriesi, European University Institute

"Elisabeth Ivarsaten and Paul Sniderman explore the opportunities for inclusion of Muslim minorities into Western democracies. Their book, The Struggle for Inclusion: Muslim Minorities and the Democratic Ethos, integrates social scientific methods with ideas from political theory, sociology, and philosophy to answer complex questions about democracy in practice. They find plenty of opportunities for more expansive forms of inclusion. However, they also explore the limits for inclusion in contemporary Western societies."
— Democracy Paradox