On the Spirit of Rights (The Life of Ideas) (Paperback) 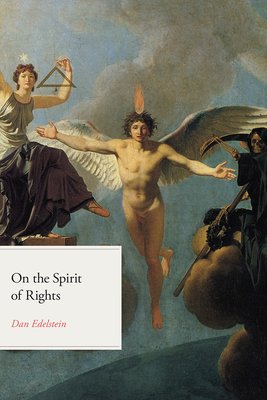 On the Spirit of Rights (The Life of Ideas) (Paperback)


Special Order—Subject to Availability
By the end of the eighteenth century, politicians in America and France were invoking the natural rights of man to wrest sovereignty away from kings and lay down universal basic entitlements. Exactly how and when did “rights” come to justify such measures?

In On the Spirit of Rights, Dan Edelstein answers this question by examining the complex genealogy of the rights that regimes enshrined in the American and French Revolutions. With a lively attention to detail, he surveys a sprawling series of debates among rulers, jurists, philosophers, political reformers, writers, and others who were all engaged in laying the groundwork for our contemporary systems of constitutional governance. Every seemingly new claim about rights turns out to be a variation on a theme, as late medieval notions were subtly repeated and refined to yield the talk of “rights” we recognize today. From the Wars of Religion to the French Declaration of the Rights of Man and of the Citizen to the 1948 Universal Declaration of Human Rights, On the Spirit of Rights is a sweeping tour through centuries of European intellectual history and an essential guide to our ways of thinking about human rights today.
Dan Edelstein is the William H. Bonsall Professor of French and (by courtesy) professor of history at Stanford University. He is the author of The Terror of Natural Right, The Enlightenment, and On the Spirit of Rights, all published by the University of Chicago Press.
"A superb, erudite piece of intellectual excavation. . . . Edelstein’s skill as an intellectual historian lies especially in his ability to situate ideas in their broadest cultural and political setting."
— New York Review of Books

"Edelstein explores how natural rights translated into human rights in his sweeping survey, which canvasses the archaeology of human rights from the Wars of Religion through the Age of Revolution to 1948. [He] provides a helpful new framework for understanding the evolution of human rights in Western society. Highly recommended."
— CHOICE

“Rarely has an existing debate been as authoritatively and breathtakingly taken to a new plane as in Edelstein’s sophisticated new story of how ‘rights’ entered European and transatlantic politics in the age of revolution. Clear, erudite, and urbane, Edelstein has shown once again why he is so highly regarded a historian of the eighteenth century’s place in Western intellectual history.”
— Samuel Moyn, Yale University

“The Spirit of Rights is an erudite, wide-ranging, and powerful reevaluation of the history of human rights in the West. Rather than viewing either (or both) the U.S. Declaration of Independence or the French Declaration of the Rights of Man as constituting a foundational moment of political modernity, Edelstein sees them as marking a moment in a lively and contentious conversation over rights that can be traced back to the sixteenth century and then through to our own day. The consequent expansion of the historical canvas on which rights have been inscribed explodes conventional teleologies. Written with verve and conviction, The Spirit of Rights is a tour de force: compelling, brilliant, and excitingly thought-provoking.”
— Colin Jones, Queen Mary University of London