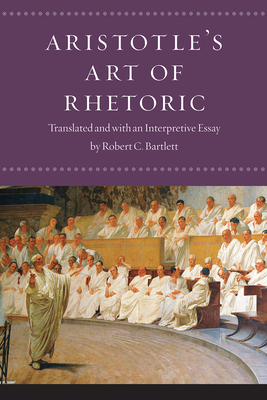 
On Our Shelves Now at:
For more than two thousand years. Aristotle’s “Art of Rhetoric” has shaped thought on the theory and practice of rhetoric, the art of persuasive speech. In three sections, Aristotle discusses what rhetoric is, as well as the three kinds of rhetoric (deliberative, judicial, and epideictic), the three rhetorical modes of persuasion, and the diction, style, and necessary parts of a successful speech. Throughout, Aristotle defends rhetoric as an art and a crucial tool for deliberative politics while also recognizing its capacity to be misused by unscrupulous politicians to mislead or illegitimately persuade others.

Here Robert C. Bartlett offers a literal, yet easily readable, new translation of Aristotle’s “Art of Rhetoric,” one that takes into account important alternatives in the manuscript and is fully annotated to explain historical, literary, and other allusions. Bartlett’s translation is also accompanied by an outline of the argument of each book; copious indexes, including subjects, proper names, and literary citations; a glossary of key terms; and a substantial interpretive essay.

Robert C. Bartlett is the Behrakis Professor of Hellenic Political Studies at Boston College. He is the author or editor of many books, including The Idea of Enlightenment and Sophistry andPolitical Philosophy and cotranslator of Aristotle’s “Nicomachean Ethics.”

"Robert C. Bartlett has made Aristotle's Art of Rhetoric accessible to contemporary readers with his literal but elegant translation. His numerous notes that explain Aristotle's historical and literary allusions as well as the subtleties of Aristotle's Greek are indispensable for following Aristotle's text...As Bartlett leads us to expect, Aristotle's Rhetoric offers a healthy correction to current ways of thinking about politics and about what we can expect of political leaders."
— Mary P. Nichols

“[This] new translation… takes into account important alternatives in the manuscript and is fully annotated to explain historical, literary, and other allusions.”
— Pennsylvania Literary Journal