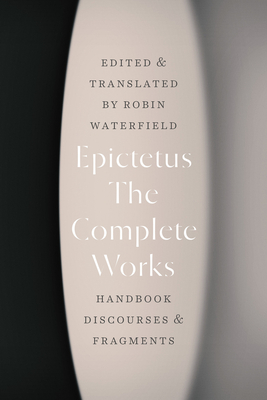 
On Our Shelves Now at:
The complete surviving works of Epictetus, the most influential Stoic philosopher from antiquity.

“Some things are up to us and some are not.”

Epictetus was born into slavery around the year 50 CE, and, upon being granted his freedom, he set himself up as a philosophy teacher. After being expelled from Rome, he spent the rest of his life living and teaching in Greece. He is now considered the most important exponent of Stoicism, and his surviving work comprises a series of impassioned discourses, delivered live and recorded by his student Arrian, and the Handbook, Arrian’s own take on the heart of Epictetus’s teaching.

In Discourses, Epictetus argues that happiness depends on knowing what is in our power to affect and what is not. Our internal states and our responses to events are up to us, but the events themselves are assigned to us by the benevolent deity, and we should treat them—along with our bodies, possessions, and families—as matters of indifference, simply making the best use of them we can. Together, the Discourses and Handbook constitute a practical guide to moral self-improvement, as Epictetus explains the work and exercises aspirants need to do to enrich and deepen their lives. Edited and translated by renowned scholar Robin Waterfield, this book collects the complete works of Epictetus, bringing to modern readers his insights on how to cope with death, exile, the people around us, the whims of the emperor, fear, illness, and much more.

CUSTOMER NOTE: THE HARDCOVER IS FOR LIBRARIES AND HAS NO JACKET.

Robin Waterfield is an independent scholar and translator living in southern Greece. In addition to thirty volumes of translations of works of Greek literature, he is the author of numerous books, ranging from children’s fiction to Greek history, most recently The Making of a King, also published by the University of Chicago Press

Robin Waterfield is an independent scholar and translator living in southern Greece. In addition to thirty volumes of translations of works of Greek literature, he is the author of numerous books, ranging from children’s fiction to Greek history, most recently The Making of a King, also published by the University of Chicago Press
"A scrupulously rendered faithful rendition of both the substance and tone of the original. . . . I am grateful for this new edition of Epictetus, not only for its deft literary style but for Waterfield’s erudite and helpful annotations. It is a privilege to have the works of this great thinker offered to us with such excellence."
— Richard Smoley

“This is an excellent book, well-produced and presented... a stimulating work of scholarship.”
— Classics for All

"It is a privilege to have the works of this great thinker offered to us with such excellence."
— Parabola

“This new translation of Epictetus by Waterfield is very welcome indeed. Both the translation and the notes help to make Epictetus more accessible than ever. Especially valuable is the introduction, which expertly situates Epictetus’s thought within wider Stoic philosophy and touches on many of the key debates in recent scholarship.”
— John Sellars, author of The Pocket Epicurean

“This is now the best English translation of Epictetus available. Idiomatic yet accurate, it captures Epictetus’s voice in all its moods: direct and personal, often brusque and challenging, sometimes ironic, sometimes humorous. The introduction and notes are a reliable and up-to-date guide to the most influential Stoic in today’s world.”
— Brad Inwood, author of Ethics after Aristotle

“Waterfield is a gifted writer and a superb classicist whose translation makes Epictetus come alive on the page. His introduction, at once scholarly and highly accessible, sheds new light on the texts and philosophy of this famous Stoic popularizer. Epictetus’s ‘live talks,’ preserved by Arrian, mix street preacher with acerbic comic. This edition of the complete works of Epictetus will be prized by all interested in delving into Stoic philosophy. We couldn’t ask for a better guide than Waterfield.”
— Nancy Sherman, author of Stoic Wisdom: Ancient Lessons for Modern Resilience