The Idea of Hegel's "Science of Logic" (Paperback) 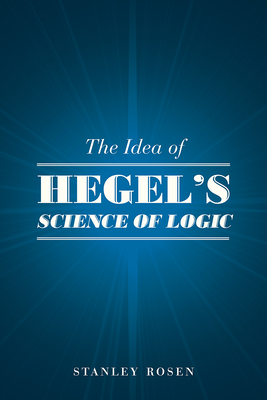 The Idea of Hegel's "Science of Logic" (Paperback)


Not On Our Shelves—Ships in 1-5 Days
Although Hegel considered Science of Logic essential to his philosophy, it has received scant commentary compared with the other three books he published in his lifetime. Here philosopher Stanley Rosen rescues the Science of Logic from obscurity, arguing that its neglect is responsible for contemporary philosophy’s fracture into many different and opposed schools of thought. Through deep and careful analysis, Rosen sheds new light on the precise problems that animate Hegel’s overlooked book and their tremendous significance to philosophical conceptions of logic and reason.

Rosen’s overarching question is how, if at all, rationalism can overcome the split between monism and dualism. Monism—which claims a singular essence for all things—ultimately leads to nihilism, while dualism, which claims multiple, irreducible essences, leads to what Rosen calls “the endless chatter of the history of philosophy.” The Science of Logic, he argues, is the fundamental text to offer a new conception of rationalism that might overcome this philosophical split. Leading readers through Hegel’s book from beginning to end, Rosen’s argument culminates in a masterful chapter on the Idea in Hegel. By fully appreciating the Science of Logic and situating it properly within Hegel’s oeuvre, Rosen in turn provides new tools for wrangling with the conceptual puzzles that have brought so many other philosophers to disaster.
Stanley Rosen (1929–2014) was the Borden Parker Bowne Professor and University Professor Emeritus at Boston University. He is the author of many books, including Nihilism: A Philosophical Essay, The Limits of Analysis, and Plato’s Republic: A Study, among others.
“This volume will be of enduring interest to students and scholars seeking a lucid companion to Hegel’s most difficult work.”

“Combines comprehensive exegesis and philosophical penetration more successfully than any other study so far published on Hegel'sScience of Logic. No one who is seriously interested in Hegel can afford to neglect Rosen's book.”
— Philosophical Review

“Combines comprehensive exegesis and philosophical penetration more successfully than any other study so far published on Hegel'sScience of Logic. No one who is seriously interested in Hegel can afford to neglect Rosen's book.”
— Philosophical Reviews

“Stanley Rosen’s undertaking in The Idea of Hegel’s 'Science of Logic' is an important and unique contribution to philosophical literature. It closes an important circle to his earlier and much-remembered work, Nihilism, a book that analyzed the problem announced by its title but was not as ambitious as to suggest a solution—it is precisely this ambition to which this newest book returns.”
— Omri Boehm, New School

“Reflection on Hegel as one of the supreme minds of the philosophic tradition has always been central to the work of Stanley Rosen, but with this study of Hegel’s Science of Logic he has produced his definitive account of this formidable treatise, which exhibits the categorical  structure of all being as it develops the conceptual fractures of Western philosophy. Lucid, thorough, and historically informed, this study is not merely a commentary but an effort to understand Hegel by rethinking the problems that animate his speculative logic. In exemplary fashion it shows how one can think about philosophy with Hegel’s assistance, and it deserves to be considered Rosen’s magnum opus.”
— Richard Velkley, Tulane University

“In this latest book, Stanley Rosen offers lucid commentary on the work that is at once the most abstruse and the most central to Hegel’s thought: the Science of Logic, in which Hegel wanted to build a coherent whole out of whatever was true in previous thought. Rosen, who has taught and written on almost every philosopher, can assess the value of Hegel’s claims with perfect competence. Beyond historical pursuits, however, he brings out the relevance of Hegel’s logics for our present-day problems by showing that most contemporary solutions correspond to moments that Hegel has shown to be merely provisional and which degenerate when isolated. Hegel’s full articulation of rationality is a powerful antidote to the rampant nihilism of our time.”
— Remi Brague, Université Paris I Panthéon-Sorbonne and University of Munich