The Portraitist: Frans Hals and His World (Hardcover) 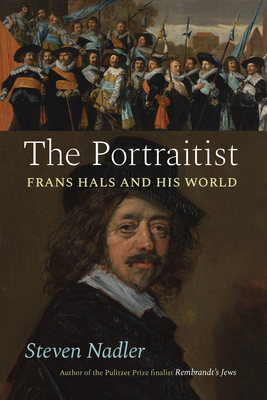 The Portraitist: Frans Hals and His World (Hardcover)


On Our Shelves Now at:
A biography of the great portraitist Frans Hals that takes the reader into the turbulent world of the Dutch Golden Age.


Frans Hals was one of the greatest portrait painters in history, and his style transformed ideas and expectations about what portraiture can do and what a painting should look like.

Hals was a member of the great trifecta of Dutch Baroque painters alongside Rembrandt and Vermeer, and he was the portraitist of choice for entrepreneurs, merchants, professionals, theologians, intellectuals, militiamen, and even his fellow artists in the Dutch Golden Age. His works, with their visible brush strokes and bold execution, lacked the fine detail and smooth finish common among his peers, and some dismissed his works as sloppy and unfinished. But for others, they were fresh and exciting, filled with a sense of the sitter’s animated presence captured with energy and immediacy.

Steven Nadler gives us the first full-length biography of Hals in many years and offers a view into seventeenth-century Haarlem and this culturally rich era of the Dutch Republic. He tells the story not only of Hals’s life, but also of the artistic, social, political, and religious worlds in which he lived and worked.

Steven Nadler is a professor of philosophy and director of the George L. Mosse/Laurence A. Weinstein Center for Jewish Studies at the University of Wisconsin, Madison. He is the author, most recently, of Spinoza: A Life, which won the 2000 Koret Jewish Book Award for biography, and Spinoza’s Heresy: Immortality and the Jewish Mind.
"Little is known about the Dutch painter Frans Hals: no letters or diaries survive, and the only contemporary documents are unrevealing. But Nadler manages to construct a satisfying quasi-biography by using the milieu of seventeenth-century Haarlem. . . . Though Hals has long been overshadowed by his contemporary Rembrandt, Nadler demonstrates why his peers held him to be 'the modern painter par excellence.'"
— New Yorker

"Nadler laments the absence of biographical material about Hals, but does a wonderful job of bringing the social context of his art to life in intricate and lively detail. In so doing, he brings this incomparable artist to life as well."
— Literary Review

"In The Portraitist, [Nadler] closes in on his subject, as it were. By sketching the artistic, social, political and religious milieus and the elite subjects who came to Hals for portraits and civic guard pieces, Nadler sketches a sharp picture of the politically turbulent first half of the seventeenth century and Hals’ position therein. This results in a quasi-biography which brings Hals to life in a refined way."
— NRC Handelsblad

"Nadler’s biography of Frans Hals discusses the life and legacy of the Dutch 17th-centurypainter against the backdrop of his thriving adopted city of Haarlem, delving into the artistic, social, political, and religious worlds of the time."
— The Art Newspaper

"Framed by the religious upheavals of the era, situated solidly in the art world of the Dutch Republic, and defining Hals’ accomplishments, Nadler’s accessible and convincing portrait presents a politically pliant and religiously ambiguous man with loose narrative brushstrokes similar to those used by the genius himself."
— Booklist

“Nadler has made 17th-century Holland his own special province. This polymath historian of philosophy has already built onto his expertise about Spinoza and Descartes with truly interdisciplinary studies, including Rembrandt’s Jews and Menasseh Ben Israel. Now he makes his own portrait of Rembrandt’s contemporary, Frans Hals, and his Haarlem society. Nadler’s deep research provides the first thorough biography of Hals, the painter who for half a century boldly fashioned lively likenesses of his fellow citizens onto his canvases.”
— Larry Silver, author of Rembrandt’s Holland

“This welcome new book on Frans Hals situates the artist, his patrons, and his city in a broader perspective than any previous study. We learn about circumstances in his life and milieu that were surely of influence on Hals’s paintings. Much to our benefit, Nadler delves into matters that we tend to take for granted.”
— Gary Schwartz, author of Rembrandt’s Universe

“Nadler has masterfully brought Frans Hals to life much as this remarkable seventeenth-century Haarlem artist animated sitters in his portrait paintings. Nadler’s engaging narrative draws the reader close to the artist and captures the essence of his distinctive manner of painting. He introduces us to Hals’s family, enumerates Hals’s financial woes, and assesses the personalities of his sitters, among them merchants, ministers, officers in militia companies, and directors of charitable institutions. Seamlessly fusing these narratives, Nadler evokes the ambiance of Haarlem’s rich and varied culture, but he also explores how broader political and religious developments in the Dutch Republic impacted Hals throughout his career.”
— Arthur K. Wheelock Jr., author of Clouds, Ice, and Bounty: The Lee and Juliet Fund Collection of Seventeenth-Century Dutch and Flemish Paintings