The Last Consolation Vanished: The Testimony of a Sonderkommando in Auschwitz (Hardcover) 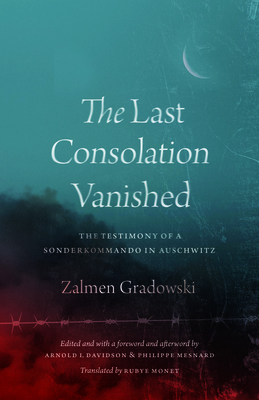 The Last Consolation Vanished: The Testimony of a Sonderkommando in Auschwitz (Hardcover)


On Our Shelves Now at:
A unique and haunting first-person Holocaust account by Zalmen Gradowski, a Sonderkommando prisoner killed in Auschwitz.

On October 7, 1944, a group of Jewish prisoners in Auschwitz obtained explosives and rebelled against their Nazi murderers. It was a desperate uprising that was defeated by the end of the day. More than four hundred prisoners were killed. Filling a gap in history, The Last Consolation Vanished is the first complete English translation and critical edition of one prisoner’s powerful account of life and death in Auschwitz, written in Yiddish and buried in the ashes near Crematorium III.

Zalmen Gradowski was in the Sonderkommando (special squad) at Auschwitz, a Jewish prisoner given the unthinkable task of ushering Jewish deportees into the gas chambers, removing their bodies, salvaging any valuables, transporting their corpses to the crematoria, and destroying all evidence of their murders. Sonderkommandos were forcibly recruited by SS soldiers; when they discovered the horror of their assignment, some of them committed suicide or tried to induce the SS to kill them. Despite their impossible situation, many Sonderkommandos chose to resist in two interlaced ways: planning an uprising and testifying. Gradowski did both, by helping to lead a rebellion and by documenting his experiences. Within 120 scrawled notebook pages, his accounts describe the process of the Holocaust, the relentless brutality of the Nazi regime, the assassination of Czech Jews, the relationships among the community of men forced to assist in this nightmare, and the unbearable separation and death of entire families, including his own. Amid daily unimaginable atrocities, he somehow wrote pages that were literary, sometimes even lyrical—hidden where and when one would least expect to find them.

The October 7th rebellion was completely crushed and Gradowski was killed in the process, but his testimony lives on. His extraordinary and moving account, accompanied by a foreword and afterword by Philippe Mesnard and Arnold I. Davidson, is a voice speaking to us from the past on behalf of millions who were silenced. Their story must be shared.
Zalmen Gradowski (1910–44) was a Jewish-Polish prisoner in Auschwitz-Birkenau and a member of the Sonderkommando who was murdered in Auschwitz.

Philippe Mesnard is professor of comparative literature in the Department of Literature at the Université Clermont Auvergne, France. He is also a member of the Institut Universitaire de France and editor of the journal Mémoires en jeu.

Rubye Monet is an English teacher and scholar, writer, and translator of Yiddish living in France.
“The degradations of the death camps, and the prospect of his own imminent end, propel Zalmen Gradowski to an act of witness that rises now and then to Biblical heights of eloquence. To read this tragically riven collaborator in the Holocaust is to be shaken to the bone.”
— J. M. Coetzee

“These two historically precise and shattering Yiddish-language testimonies by Zalmen Gradowski rank among the most important documents of the twentieth century. An outstanding translation by Monet, and two fine essays accompanied by a superb critical apparatus by editors Davidson and Mesnard bring these documents of murder and resistance to life like no edition before. The outcome is a major achievement in Holocaust historiography.”
— Robert Jan van Pelt, author of 'The Case for Auschwitz'