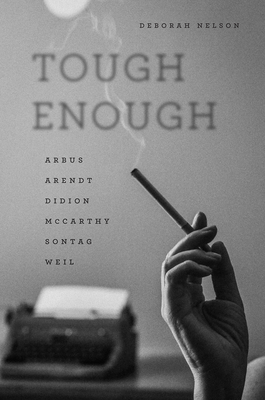 
Not On Our Shelves—Ships in 1-5 Days
This book focuses on six brilliant women who are often seen as particularly tough-minded: Simone Weil, Hannah Arendt, Mary McCarthy, Susan Sontag, Diane Arbus, and Joan Didion. Aligned with no single tradition, they escape straightforward categories. Yet their work evinces an affinity of style and philosophical viewpoint that derives from a shared attitude toward suffering. What Mary McCarthy called a “cold eye” was not merely a personal aversion to displays of emotion: it was an unsentimental mode of attention that dictated both ethical positions and aesthetic approaches.

Tough Enough traces the careers of these women and their challenges to the pre-eminence of empathy as the ethical posture from which to examine pain. Their writing and art reveal an adamant belief that the hurts of the world must be treated concretely, directly, and realistically, without recourse to either melodrama or callousness. As Deborah Nelson shows, this stance offers an important counter-tradition to the familiar postwar poles of emotional expressivity on the one hand and cool irony on the other. Ultimately, in its insistence on facing reality without consolation or compensation, this austere “school of the unsentimental” offers new ways to approach suffering in both its spectacular forms and all of its ordinariness.
Deborah Nelson is associate professor of English at the University of Chicago. She is the author of Pursuing Privacy in Cold War America.
"Deborah Nelson concedes that the six women whose careers are canvassed in her 2017 book Tough Enough: Arbus, Arendt, Didion, McCarthy, Sontag, Weil would definitely not appreciate being classed together, by gender or any other category. Thankfully for us, Nelson is undeterred: she boldly gathers Diane Arbus, Hannah Arendt, Joan Didion, Mary McCarthy, Susan Sontag, and Simone Weil into a common room to stage a wonderfully readable, engaging, provocative conversation about their similarities in style and outlook."
— Lori Jo Marso | Los Angeles Review of Books

"Behind Nelson’s cool rhetoric lurks an exciting thinker . . . . Raising the question of toughness as a methodology and style is compelling and timely, especially at a time when women are both assuming more powerful roles in public life and having to fight against hostile stereotypes. Nelson is intellectually tough enough to take on these six case studies."
— Times Literary Supplement

“Tough Enough is an important contribution to literary, gender, affect, and trauma studies, and an all-too-timely read in our current political climate, for academic and non-academic readers alike. At a time when the study of the humanities is under threat, Nelson proves, again and again, that analysis of evidence, critical thinking, and argumentation are vital tools for confronting brutal political realities. May we all be tough enough to approach the world as Weil, Arendt, McCarthy, Sontag, Arbus, and Didion.”
— Jacquelyn Ardam | Los Angeles Review of Books

"Nelson is primarily interested in the aesthetic, political, and philosophical concerns guiding the work these women produced; thus, Tough Enough is light on biographical detail, heavy on fine-grained stylistic analysis. Anyone who already admires Weil, Arendt, McCarthy, Sontag, Didion, or Arbus will no doubt appreciate this approach, and Nelson — obviously aware that most readers won't be familiar with all of her subjects — provides some context for each of them."
— Washington Independent Review of Books

"Living with suffering, living with failure, living with facts, living without comfort—that’s the kind of life, collectively proposed by the women here, that unsentimental thinking demands. Faced with this challenge, it’s no wonder that many of us prefer self-justifying stories. But what becomes clear in reading Nelson’s account of these six women is that, for all their flaws and disagreements, they represent a way of living that is attainable. To seek out the facts, to desire the truth, is to create the potential for transformation and response. Unsentimentality is intimately linked with the capacity for love, kindness, rebuke, and hope. As an old book once had it: the truth will set you free."
— Education and Culture

"Unsurprisingly, her subjects' unsentimental attitudes toward human suffering frequently earned them scorn and derision from allies and enemies alike for supposedly being heartless or cruel. Nelson complicates this predominant view not only by examining the gendered presumptions that constrained women's public self-expression but also by illustrating how and why these women's tough-minded perspective is part of a profoundly ethical and deeply engaged response to the ample brutality of the contemporary world."

"Her book contributes significantly to our understanding of these remarkable women—Simone Weil, Hannah Arendt, Mary McCarthy, Susan Sontag, Diane Arbus, and Joan Didion— and immeasurably to our thinking about how we as critics understand representations of suffering."

"Tough Enough is an important book not just because it insists on these six women’s contributions to intellectual history but also because it proposes that these contributions might temper our contemporary enthusiasm for empathy as a cure-all for our politics and a salve for our consciences."
— The Australian

“Nelson sets herself an ambitious goal in this comparative discussion of six 20th-century women. . .Although Nelson provides some biographical detail in discussing the women, it will likely be insufficient for readers wholly unfamiliar with the book's subjects. But this is decidedly not a flaw, because the book is intended not as a collective biography but rather as a reassessment of the unconventionally humanistic tenor of a group of artists and thinkers whose contributions have perhaps been misperceived and thereby underappreciated. Highly recommended.”
— Choice

"It manages to be a hagiography without veneration. Establishing a cast of hardened saints. . .Nelson brilliantly shows how these women used unsentimentality as an aesthetic and political tool to survive their own time and how we might turn to them to survive our present crises.”
— Fields Magazine (Best non-fiction books of 2017)

“Nelson’s project is. . .at some level, a work of restitution. She resurrects a strain of distinctly feminine political engagement that, in refusing the gendered polarity of masculine stoicism and feminine feeling, quite simply failed to register as a tradition at all.”
— The Millions

"Agree or disagree with the case for unsentimentality, Tough Enough is well worth the time: for Nelson’s insights on some landmark works of the 20th (and for Joan Didion, the 21st) century, and for its considerations on how to face suffering. How to see it and wholly appreciate it without trying to inhabit its emotional space. And to wrest something meaningful from that."
— WBUR, The ARTery

“The politics and poetics of impersonality and individualism articulated by Arendt, Sontag, and Didion seem potentially retrograde. What Nelson calls toughness might in another register seem an appeal to reason and universalism, two ideals often inducing myopia even when their adherents imagine themselves to be at their most vigilant. Nelson, however, finds radical receptivity in depersonalized detachment. . . . Nelson argues that her writers, despite their stated allegiance to autonomy, attended to the human enmeshment in a world of pain that goes beyond the individual.”
— Public Books

“The women profiled in this book developed the ability to engage in theoretical discourse in the wake of such horrors as the Holocaust, not to mention personal illness and death, and that is why their work continues to resonate; a Sontag or a McCarthy defines a subject long after their first introduction. . . . It is a wonderful thing to read such a cogent and thought-provoking analysis of their work.”
— Rain Taxi

“Thanks to Nelson, we now know that these ‘tough’ women share the trait of unsentimentality, which is not a character defect, as their critics often claimed, but a principled commitment, even a style: austere, pitiless, clinical, unwavering. Frankly feminist, Tough Enough argues that while sentimentalism has earned enormous critical attention, the unsentimental has largely gone unprocessed by literary critics and theorists. This superb book about women, style, criticism, politics, and misogyny is the beginning of the end of that.”
— Bonnie Honig, author of Antigone, Interrupted

“Tough Enough is a brilliant defense of coldness. Nelson gathers together six extraordinarily well-known modern women who, one way or another, and often in deep—and sometimes conspicuous—concert, championed theological, philosophical, and political principles, as well as aesthetic practices, which together constitute an important school of the unsentimental. For those who are devoted to these six figures, who can’t get enough of them, and who always knew that they somehow belonged together, this illuminating book will be welcomed as a revelation and confirmation.”
— Jeff Nunokawa, author of Note Book

"A beautiful and trenchant study of six women – Simone Weil, Joan Didion, Mary McCarthy, Hannah Arendt, Diane Arbus and Susan Sontag – who were all criticised for being cold. Their offence was to look the world in the face and to report what they found."
— David Hare

"Nelson’s book is a useful book...Nelson’s six-part study might be coherent enough even without recourse to toughness as a unifying category. What holds the women together is their capacity to suggest a critical canon concerned with values and concepts that veer away from the poststructuralist imagination."
— Mena Mitrano

"Tough Enough: Arbus, Arendt, Didion, McCarthy, Sontag, Weil by Deborah Nelson is a major intervention in the study of the narrative strategies utilized by women writers as well as a provocative contribution to studies of how writers engage with the atrocities of the post-Second World War period...The richness and depth of Nelson’s work cannot be overstated; Tough Enough is a major contribution to the study of post-1945 narrative strategies that engage with suffering and a thorough study of unsentimental post-1945 women writers."
— Year's Work in English Studies