Rwanda Before the Genocide (Hardcover) 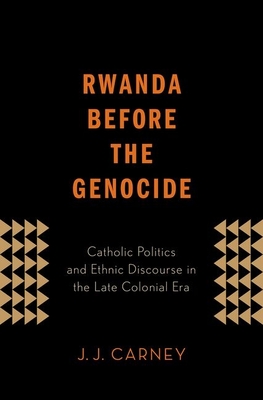 Rwanda Before the Genocide (Hardcover)


Special Order—Subject to Availability
Winner of the Bethwell A. Ogot Book Prize of the African Studies Association Between 1920 and 1994, the Catholic Church was Rwanda's most dominant social and religious institution. In recent years, the church has been critiqued for its perceived complicity in the ethnic discourse and political corruption that culminated with the 1994 genocide. In analyzing the contested legacy of Catholicism in Rwanda, Rwanda Before the Genocide focuses on a critical decade, from 1952 to 1962, when Hutu and Tutsi identities became politicized, essentialized, and associated with political violence. This study--the first English-language church history on Rwanda in over 30 years--examines the reactions of Catholic leaders such as the Swiss White Father Andr Perraudin and Aloys Bigirumwami, Rwanda's first indigenous bishop. It evaluates Catholic leaders' controversial responses to ethnic violence during the revolutionary changes of 1959-62 and after Rwanda's ethnic massacres in 1963-64, 1973, and the early 1990s. In seeking to provide deeper insight into the many-threaded roots of the Rwandan genocide, Rwanda Before the Genocide offers constructive lessons for Christian ecclesiology and social ethics in Africa and beyond.

J.J. Carney is Assistant Professor of Theology at Creighton University. His research and teaching interests engage the theological and historical dimensions of the Catholic experience in modern Africa. He has published articles in African Ecclesial Review, Modern Theology, Journal of Religion in Africa, and Studies in World Christianity.