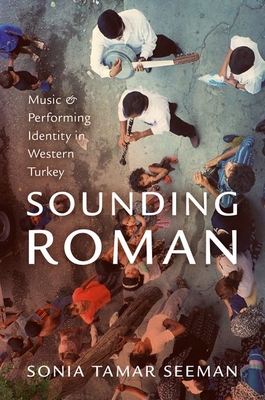 
Special Order—Subject to Availability
How do marginalized communities speak back to power when they are excluded from political processes and socially denigrated? In what ways do they use music to sound out their unique histories and empower themselves? How can we hear their voices behind stereotyped and exaggerated portrayals promoted by mainstream communities, record producers and government officials? Sounding Roman: Music and Performing Identity in Western Turkey explores these questions through a historically-grounded and ethnographic study of Turkish Roman ("Gypsies") from the Ottoman period up to the present. Drawing on extensive ethnographic fieldwork (1995 to the present), collected oral histories, historical documents of popular culture (recordings, images, song texts, theatrical scripts), legal and administrative documents, this book takes a hard look at historical processes by which Roman are stereotyped as and denigrated as " ingene"---a derogatory group name equivalent to the English term, "gypsy", and explores creative musical ways by which Roman have forged new musical forms as a means to create and assert new social identities. Sounding Roman presents detailed musical analysis of Turkish Roman musical genres and styles, set within social, historical and political contexts of musical performances. By moving from Byzantine and Ottoman social contexts, we witness the
reciprocal construction of ethnic identity of both Roman and Turk through music in the 20th century. From neighborhood weddings held in the streets, informal music lessons, to recording studios and concert stages, the book traces the dynamic negotiation of social identity with new musical sounds. Through a detailed ethnography of Turkish Roman ("Gypsy") musical practices from the Ottoman period to the present, this work investigates the power of music to configure new social identities and pathways for political action, while testing the limits of cultural representation to effect meaningful social change.

Sonia Tamar Seeman is an ethnomusicologist at the University of Texas, Austin. She has conducted field research and worked with Romani professional musicians in Macedonia since 1985 and in Turkey since 1995, and consulted with human rights organizations. In addition to producing and facilitating recording projects, she is also founder and director of Middle Eastern Ensemble "Bereket" at the University of Texas, Ask-I Mesk and an active performer on Turkish G clarinet and Turkish kanun.