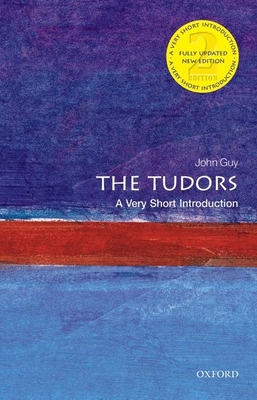 
On Our Shelves Now at:
The monarchs of the Tudor period are among some of the most well-known figures in British history. John Guy presents a compelling and fascinating exploration of the Tudors in the new edition of this Very Short Introduction. Looking at all aspects of the period, from beginning to end, he considers Tudor politics, religion, and economics, as well as issues relating to gender and minority rule, and the art, architecture, and social and material culture of the time. Introducing all of the key Tudor monarchs, Guy considers the impact the Tudor period had not only at the time, but also the historical legacy it left behind. About the Series:
Oxford's Very Short Introductions series offers concise and original introductions to a wide range of subjects--from Islam to Sociology, Politics to Classics, Literary Theory to History, and Archaeology to the Bible. Not simply a textbook of definitions, each volume in this series provides trenchant and provocative--yet always balanced and complete--discussions of the central issues in a given discipline or field. Every Very Short Introduction gives a readable evolution of the subject in question, demonstrating how the subject has developed and how it has influenced society. Eventually, the series will encompass every major academic discipline, offering all students an accessible and abundant reference library. Whatever the area of study that one deems important or appealing, whatever the topic that fascinates the general reader, the Very Short Introductions series has a handy and affordable guide that will likely prove indispensable.

John Guy, Fellow of Clare College, Cambridge John Guy is a Fellow of Clare College, Cambridge. His previous titles include My Heart is My Own: The Life of Mary Queen of Scots (Fourth Estate, 2004), A Daughter's Love: Thomas and Margaret More (Fourth Estate, 2008), and Thomas Becket: Warrior, Priest, Rebel, Victim (Penguin-Viking, 2012). Recognised as one of Britain's leading historians on the Tudor period, he lecturers and speaks widely at literary festivals and on radio and television. He was the Winner of the 2004 Whitbread Biography Award and of the 2005 Marsh Biography Award.