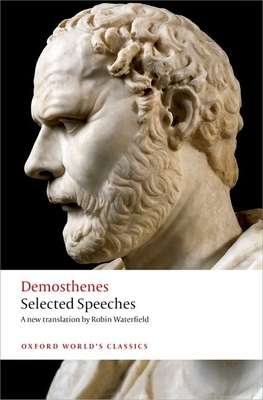 
On Our Shelves Now at:
'Even if everyone else succumbs to slavery, we must still fight for our freedom.' Admired by many in the ancient world as the greatest of the classic Athenian orators, Demosthenes was intimately involved in the political events of his day. As well as showing a master orator at work, his speeches are a prime source for the history of the period, when Athens was engaged in a doomed
struggle against the rising power of Macedon under the brilliant father and son, Philip and Alexander. Demosthenes wrote for the courts, both for political trials in which he was involved and for other cases in which he acted as ghost-writer for plaintiff or defendant, and his lawcourt speeches give
an unrivalled glimpse of the daily life of ancient Athens. He also played a central role in education in Greece and Rome from the Hellenistic period onward, and was imitated by the greatest of Roman orators, Cicero. About the Series: For over 100 years Oxford World's Classics has made available the broadest spectrum of literature from around the globe. Each affordable volume reflects Oxford's commitment to scholarship, providing the most accurate text plus a wealth of other valuable features, including expert
introductions by leading authorities, voluminous notes to clarify the text, up-to-date bibliographies for further study, and much more.

Robin Waterfield was a university lecturer and publisher before becoming a full time writer. His translations for Oxford World's Classics include Plato's Republic and five other editions of Plato's dialogues, Herodotus, Plutarch, two volumes of Euripides' plays, Xenophon's The Expedition of Cyrusand The First Philosophers: The Presocratics and the Sophists. His other books include Dividing the Spoils: the War for Alexander the Great's Empire (OUP, 2011). He lives in Greece. Chris Carey has previously taught at Cambridge, St Andrews, and Royal Holloway before moving to UCL. He has published widely Greek oratory and law, including Democracy in classical Athens (Bristol Classical Press, 2000) and Trials from classical Athens (Routledge, 2/e 2011).