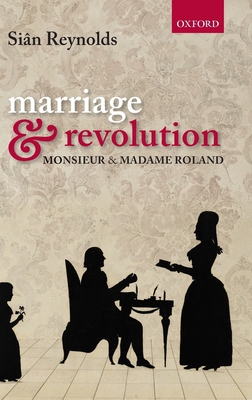 
Not On Our Shelves—Ships in 1-5 Days
(This book cannot be returned.)
Marriage and Revolution is a double biography of Jean-Marie Roland (1734-1793) and Marie-Jeanne Phlipon, later Madame Roland (1754-1793), leading figures in the French Revolution. J.-M. Roland was minister of the Interior for a total of eight months during 1792. The couple were close to Brissot and the Girondins, and both died during the Terror. Mme Roland became famous for her posthumous prison memoirs and is the subject of many biographies, but her husband, despite being a key figure in administration of France, seldom out of the limelight during his time in office, is often marginalized in histories of the Revolution. Sian Reynolds examines the Roland marriage from its beginnings in an ancien regime mesalliance, opposed by both families, through its close cooperation in the 1780s, to its final phase as a political partnership during the Revolution. Both Roland's actions as minister and Mme Roland's role as a woman close to power were praised and blamed at the time, and the controversies have persisted. Based on manuscript sources including many unpublished letters, Marriage and Revolution sets out to examine an unusually companionate marriage over the long term: its intimacy, parenthood, everyday life in the provinces, friendships, academic cooperation, political enthusiasms and quarrels, and finally its dramatic ending during the Revolution.

Sian Reynolds was born and educated in Cardiff, read Modern Languages at St Anne's College, Oxford, and has a doctorate in History from the University of Paris-VII, supervised by Michelle Perrot. She has taught in secondary schools, adult education, the Universities of Sussex and Edinburgh, and was Professor of French at the University of Stirling from 1990-2004. She has published books on both French and Scottish history, and translated works by leading French historians such as Fernand Braudel, as well as detective novels by Fred Vargas. She is a past president of the Association for the Study of Modern & Contemporary France, and is currently Chair of the Scottish Working People's History Trust.