War Comes to Garmser: Thirty Years of Conflict on the Afghan Frontier (Paperback) 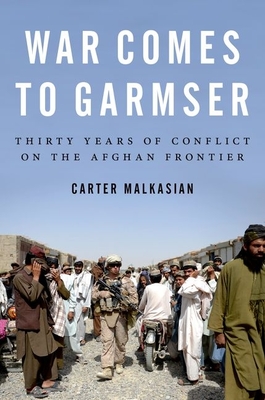 War Comes to Garmser: Thirty Years of Conflict on the Afghan Frontier (Paperback)


Not On Our Shelves—Ships in 1-5 Days
If you want to understand Afghanistan, writes Carter Malkasian, you need to understand what has happened on the ground, in the villages and countryside that were on the frontline. These small places are the heart of the war. Modeled on the classic Vietnam War book, War Comes to Long An, Malkasian's War Comes to Garmser promises to be a landmark account of the war in Afghanistan. The author, who spent nearly two years in Garmser, a community in war-torn Helmand province, tells the story of this one small place through
the jihad, the rise and fall of Taliban regimes, and American and British surge. Based on his conversations with hundreds of Afghans, including government officials, tribal leaders, religious leaders, and over forty Taliban, and drawing on extensive primary source material, Malkasian takes readers
into the world of the Afghans. Through their feuds, grievances, beliefs, and way of life, Malkasian shows how the people of Garmser have struggled for three decades through brutal wars and short-lived regimes. Beginning with the victorious but destabilizing jihad against the Soviets and the ensuing
civil war, he explains how the Taliban movement formed; how, after being routed in 2001, they returned stronger than ever in 2006; and how Afghans, British, and Americans fought with them thereafter. Above all, he describes the lives of Afghans who endured and tried to build some kind of order out
of war. While Americans and British came and went, Afghans carried on, year after year. Afghanistan started out as the good war, the war we fought for the right reasons. Now for many it seems a futile military endeavor, costly and unwinnable. War Comes to Garmser offers a fresh, original perspective on this war, one that will redefine how we look at Afghanistan and at modern war in
general.

Carter Malkasian spent nearly two years in the Afghan district of Garmser, in war torn Helmand province as a political officer for the US Department of State. For the last decade, he has studied war, and written about it, and worked in war zones, including long stints in Iraq's Al Anbar province.The author of Counterinsurgency in Modern Warfare (named by Foreign Affairs as one of the ten books to read on counterinsurgency) and A History of Modern Wars of Attrition, he has also served as the director of the stability and development program at the Center for Naval Analyses. He has a Ph.D. inhistory from Oxford University.