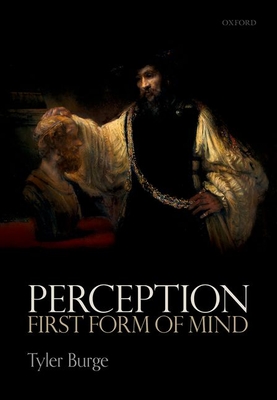 
Not On Our Shelves—Ships in 1-5 Days
In Perception: First Form of Mind, Tyler Burge develops an understanding of the most primitive type of mental representational: perception. Focusing on the functions and capacities of perceptual states, Burge accounts for their representational content and structure, and develops a formal semantics for them. The discussion explains the role of iconic format in the structure. It also situates the accounts of content, structure, and semantics within scientific explanations of perceptual-state formation, emphasizing formation of perceptual categorization. In the book's second half, Burge discusses what a perceptual system is. Exploration of relations between perception and other primitive capacities-conation, attention, memory, anticipation, affect, learning, and imagining-helps distinguish perceiving, with its associated capacities, from thinking, with its associated capacities. Drawing mainly on vision science, not introspection, Perception: First Form of Mind is a rigorous,
agenda-setting work in philosophy of perception and philosophy of science.
Tyler Burge, Flint Professor of Philosophy, UCLA Tyler Burge is Flint Professor of Philosophy, UCLA, where has taught since 1971. He has held visiting positions at Harvard, MIT, Stanford, Munich, Bayreuth, Bologna, and Zurich. He has delivered numerous named lecture series, including the Locke Lectures, Dewey Lectures, Whitehead Lectures, Kant Lectures, Petrus Hispanus Lectures, and Nicod Lectures. His work has made contributions to philosophy of mind, philosophy of psychologyepistemology, philosophy of language, philosophy of logic, and the history of philosophy. He has published four books with OUP: Origins of Objectivity (2010) and three volumes of essays, Truth, Thought, Reason (2005), Foundations of Mind (2007), and Cognition through Understanding (2013).