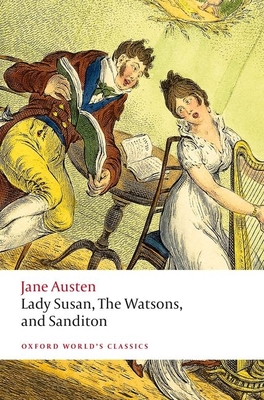 
In Stock—Click for Locations
'I am tired of submitting my will to the caprices of others-of resigning my own judgement in deference to those to whom I owe no duty, and for whom I feel no respect.' The unfinished fictions collected here are the novels and other writing that Jane Austen did not publish. The protagonist of the earliest story is Lady Susan, a sexual predator and a brilliant and manipulative sociopath. The Watsons, a tale of riches to rags, is set in a village deep in mud and misery where the Watson sisters waste away, day after dull day, waiting for the suitors who never appear. Sanditon, the novel interrupted by the author's death, is a topical satire on the niche marketing campaign waged by investors in the latest seaside resort, the fictional Sanditon, situated on England's over-supplied south coast. If The Watsons shares the disturbed life of a Chekhov short story, Sanditon's cast of eccentrics anticipates the zany world of Dickens. Experimental and sharp-elbowed, all three probe new areas of invention and push out beyond what we expect to find in a novel by Jane Austen. This edition collects together all Austen's unpublished adult fiction, poetry, and related writings, written in her late teens, in her late twenties, and in the year she died, aged forty-one. They contribute more than a dash of discomfort to our modern image of the romantic novelist and reveal Jane Austen's development as a writer.

Jane Austen Kathryn Sutherland is the editor of Austen-Leigh's Memoir of Jane Austen and Other Family Recollections, as well as Jane Austen's Teenage Writings and Sanditon for the Oxford World's Classics. She has created a digitial edition of Jane Austen's Fiction Manuscripts (2012), the print edition published by OUP in 2017. She is the author of Jane Austen's Textual Lives: from Aeschylus to Bollywood (OUP, 2005) and Jane Austen: Writer in the World (Bodlien Publications, 2017).