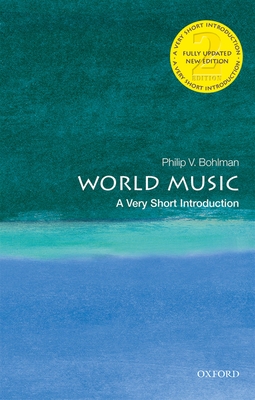 
Not On Our Shelves—Ships in 1-5 Days
The term 'world music' encompasses both folk and popular music across the globe, as well as the sounds of cultural encounter and diversity, sacred voices raised in worship, local sounds, and universal values. It emerged as an invention of the West from encounters with other cultures, and holds the power to evoke the exotic and give voice to the voiceless. Today, in both sound and material it has a greater presence in human societies than ever before. The politics of which world music are a part - globalization, cosmopolitanism, and nationalism - play an increasingly direct role in societies throughout the world, but are at the same time also becoming increasingly controversial. In this new edition of his Very Short Introduction, Philip Bohlman considers questions of meaning and technology in world music, and responds to the dramatically changing political world in which people produce and listen to world music. He also addresses the different ways in which world music is created, disseminated, and consumed, as the full reach of the internet and technologies that store and spread music through the exchange of data files spark a revolution in the production and availability of world music. Finally, Bohlman revises the way we think of the musician, as an increasingly mobile individual, sometimes because physical borders have fallen away, at other times because they are closing. ABOUT THE SERIES: The Very Short Introductions series from Oxford University Press contains hundreds of titles in almost every subject area. These pocket-sized books are the perfect way to get ahead in a new subject quickly. Our expert authors combine facts, analysis, perspective, new ideas, and enthusiasm to make interesting and challenging topics highly readable.

Philip V. Bohlamn is Ludwig Rosenberger Distinguished Service Professor in Jewish History at the University of Chicago. He is also Honorarprofessor, Hochschule fur Musik, Theater und Medien Hannover (Germany), and is Elected Corresponding Fellow of the British Academy (2007), and Elected Fellow of the American Academy of Arts and Sciences (2011). He won the Donald Tovey Memorial Prize (with Christine Wilkie Bohlman) in 2009, and the John Simon Guggenheim Memorial Foundation Fellowship (2017-18). He is the author and editor of several books, including Jewish Music and Modernity (OUP, 2013) and Resounding Transcendence: Transitions in Music, Ritual, and Religion (co-edited with Jeffers Engelhardt, OUP 2016). He is also the Associate Editor (for ethnomusicology) for Grove Music Online, the general editor of Grove Music in Global Perspective (with Martin Stokes), and is on the Editorial Board of New Cultural History of Music.