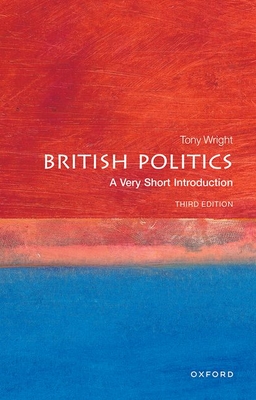 
In Stock—Click for Locations
At a time when politics in Britain is experiencing unprecedented turmoil, this Very Short Introduction examines the past, present, and possible future of British politics. Tony Wright puts current events into a longer and larger perspective, ranging from political ideas to political
institutions, and offering an overview of the British political tradition. Throughout, he identifies key characteristics and ideas of British politics, and investigates what makes it distinctive, while emphasizing how these characteristics are reflected in the way the political system functions. This new edition includes key material on Brexit, analysing the divisions revealed by the Brexit vote and the extent to which Britain now has a politics of identity, and considering whether the referendum itself has fundamentally altered the constitutional landscape. ABOUT THE SERIES:
The Very Short Introductions series from Oxford University Press contains hundreds of titles in almost every subject area. These pocket-sized books are the perfect way to get ahead in a new subject quickly. Our expert authors combine facts, analysis, perspective, new ideas, and enthusiasm to make
interesting and challenging topics highly readable.

Tony Wright is Emeritus Professor of Government and Emeritus Professor of Government and Public Policy at UCL. Between 1992 and 2010, he served as a UK Member of Parliament for Cannock Chase, and in 2009 chaired the parliamentary committee that produced the 'Wright reforms' of the House of Commons.He is the author or editor of over twenty books, including Doing Politics (Biteback, 2012) and Rethinking Democracy (Wiley, 2019).