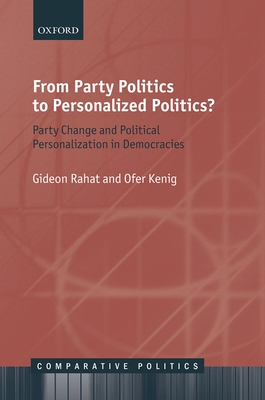 
Not On Our Shelves—Ships in 1-5 Days
What do Beppe Grillo, Silvio Berlusconi, Emmanuel Macron (and also Donald Trump) have in common? They are prime examples of the personalization of politics and the decline of political parties. This volume systematically examines these two prominent developments in contemporary democratic politics and the relationship between them. It presents a cross-national comparative comparison that covers around 50 years in 26 democracies through the use of more than 20 indicators. It offers the most comprehensive comparative cross-national estimation of the variance in the levels and patterns of party change and political personalization among countries to date, using existing works as well injecting fresh cross-national comparative data. In the case of party change, it offers an analysis that extends beyond the dichotomous debate of party decline versus party adaptation. In the matter of political personalization, the emphasis on variance helps in bridging between the high theoretical expectations and disappointing empirical findings. As for the theoretically sound linkage between the two phenomena, not only is this the first study to comprise a comprehensive cross-national
examination, but it also proposes a more nuanced understanding of this relationship. Comparative Politics is a series for researchers, teachers, and students of political science that deals with contemporary government and politics. Global in scope, books in the series are characterised by a stress on comparative analysis and strong methodological rigour. The series is published in association with the European Consortium for Political Research. For more information visit: www.ecprnet.eu. The series is edited by Emilie van Haute, Professor of Political Science, Universite libre de Bruxelles; Ferdinand Muller-Rommel, Director of the Center for the Study of Democracy, Leuphana University; and Susan Scarrow, John and Rebecca Moores Professor of Political Science, University of Houston.

Gideon Rahat is an Associate Professor in the Department of Political Science at the Hebrew University of Jerusalem. His research fields are comparative politics and Israeli politics. His interests include political parties, electoral reform, the personalization of politics and candidate selection methods, and he has published widely on the politics of electoral reform and co-authored books on candidate selection methods. Ofer Kenig is a Senior Lecturer at Ashkelon Academic College and a research fellow at the Israel Democracy Institute. His areas of research include comparative politics, political parties, leadership and candidate selection and Israeli politics. He co-authored the books Reforming the Israel Political System (2013) and The Promise and Challenge of Party Primary Elections (2016). In addition, he has published articles in a range of journals, including Electoral Studies and Representation, as well as chapters in edited volumes.