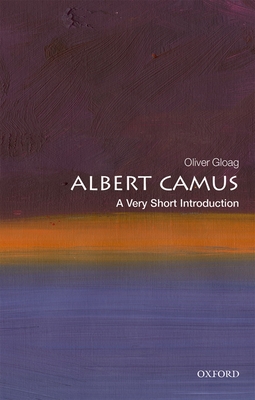 
In Stock—Click for Locations
Few would question that Albert Camus (1913-1960), novelist, playwright, philosopher and journalist, is a major cultural icon. His widely quoted works have led to countless movie adaptions, graphic novels, pop songs, and even t-shirts. In this Very Short Introduction, Oliver Gloag chronicles the inspiring story of Camus' life. From a poor fatherless settler in French-Algeria to the winner of the Nobel Prize for Literature, Gloag offers a comprehensive view of Camus' major works and interventions, including his notion of the
absurd and revolt, as well as his highly original concept of pure happiness through unity with nature called bonheur. This original introduction also addresses debates on coloniality, which have arisen around Camus' work. Gloag presents Camus in all his complexity a staunch defender of many progressive causes, fiercely attached to his French-Algerian roots, a writer of enormous talent and social awareness plagued by self-doubt, and a crucially relevant author whose major works continue to significantly impact our
views on contemporary issues and events.
ABOUT THE SERIES: The Very Short Introductions series from Oxford University Press contains hundreds of titles in almost every subject area. These pocket-sized books are the perfect way to get ahead in a new subject quickly. Our expert authors combine facts, analysis, perspective, new ideas, and
enthusiasm to make interesting and challenging topics highly readable.

Oliver Gloag is Associate Professor of French and Francophone Literature at the University of North Carolina, Asheville. He was educated at Columbia University, Tulane University (J.D.), and Duke University (Ph.D.); he specializes in francophone and postcolonial literature, twentieth century Frenchliterature, and cultural history. He has published on Sartre and Camus and contributed to The Sartrean Mind (Routledge). He is the author of a forthcoming book on the ideological and political claiming of Camus in contemporary France (La fabrique).