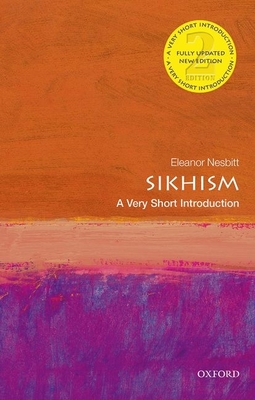 
On Our Shelves Now at:
The Sikh religion has a following of over 20 million people worldwide, and is ranked as the world's fifth largest religion. However, events such as the verbal and physical attacks on Sikhs just after September 11, where Sikhs were being mistaken for Muslims, suggest that the Sikh faith still remains mysterious to many. This Very Short Introduction introduces newcomers to the meaning of the Sikh religious tradition, its teachings, practices, rituals and festivals. Eleanor Nesbitt highlights and contextualizes the key threads in the history of Sikhism, from the first Gurus to martyrdom, militarization, and the increasingly significant diaspora. Examining gender, caste, and the changes that are currently underway in the faith, Nesbitt considers contemporary Sikh identities and their role in our world. ABOUT THE SERIES: The Very Short Introductions series from Oxford University Press contains hundreds of titles in almost every subject area. These pocket-sized books are the perfect way to get ahead in a new subject quickly. Our expert authors combine facts, analysis, perspective, new ideas, and enthusiasm to make interesting and challenging topics highly readable.

Eleanor Nesbitt is Professor Emeritus in the Warwick Religions and Education Research Unit, Centre for Education Studies, University of Warwick. Her ethnographic research has focused on the lives of young people in Sikh, Hindu, and Christian communities in the UK. Her publications include Intercultural Education: Ethnographic and Religious Approaches (Sussex Academic Press, 2004) and Interfaith Pilgrims (Quaker Books, 2003).