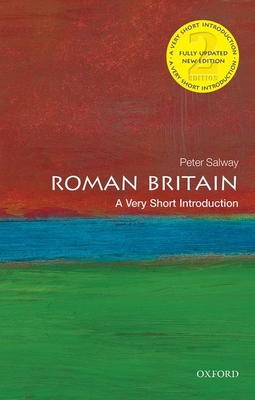 
On Our Shelves Now at:
For four centuries Britain was an integral part of the Roman Empire, a political system stretching from Turkey to Portugal and from the Red Sea to the Tyne and beyond. Its involvement with Rome started long before the Conquest launched by the Emperor Claudius in 43 AD, and it continued to be a part of the Roman world for some time after the final break with Roman rule. Bringing together archaeological investigation and historical scholarship, Peter Salway explores some of the key issues arising from this period in Britain's history, discussing the question of identity at this time and analysing the importance of widespread literacy in Roman Britain. Covering the period from Julius Caesar's first forays into Britain and Claudius's subsequent conquest, as well as Britain under the later Roman Empire, Salway outlines the key events of this time period, providing a focus on society in Roman Britain, and offering a thoughtful consideration of the aftermath of Roman rule. In the new edition of this Very Short Introduction, Peter Salway makes a number of essential updates in light of recent research in the area. He looks at issues of ethnicity, "Britishness", and post-colonialism, provides alternative theories to the end of the Roman period in Britain, and draws parallels between the history of Roman Britain and a wide range of other periods, territories, and themes, including the modern experience of empires and national stereotypes. ABOUT THE SERIES:
The Very Short Introductions series from Oxford University Press contains hundreds of titles in almost every subject area. These pocket-sized books are the perfect way to get ahead in a new subject quickly. Our expert authors combine facts, analysis, perspective, new ideas, and enthusiasm to make interesting and challenging topics highly readable.

Peter Salway has been a Special Advisor on Roman Britain to the National Trust Chedworth Roman Villa Development Project since the early 1990s to the present. He has written a 5-year excavation plan and a 15-year research agenda for the next stage of the project. He is the author of The Oxford Illustrated History of Roman Britain (OUP, 1993) and The Frontier People of Roman Britain (CUP, 2009).