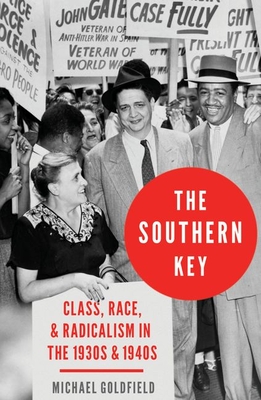 
Not On Our Shelves—Ships in 1-5 Days
A sweeping account of Southern political economy in the New Deal era. The golden key to understanding the last 75 years of American political development, the eminent labor relations scholar Michael Goldfield argues, lies in the contests between labor and capital in the American South during the 1930s and 1940s. Labor agitation and unionization efforts in the South in the New Deal era were extensive and bitterly fought, and ranged across all of the major industries of the region. In The Southern Key, Goldfield charts the rise of labor activism in each and then examines how and why labor organizers struggled so mightily in the region. Drawing from meticulous and unprecedented archival material and detailed data on four core industries-textiles, timber, coal mining, and steel-he argues that much of what is important in American politics and society today was largely shaped by the successes and failures of the labor movements of the 1930s and 1940s. Most notably, Goldfield shows how the broad-based failure to organize the South during this period made it what it is today. He contends that this early defeat for labor unions not only contributed to the exploitation of race and right-wing demagoguery in the South, but has also led to a decline in unionization, growing economic inequality, and an inability to confront and dismantle white supremacy throughout the US. A sweeping account of Southern political economy in the New Deal era, The Southern Key challenges the established historiography to tell a tale of race, radicalism, and betrayal that will reshape our understanding of why America developed so differently from other advanced industrial nations over the course of the last century.