A Better Ape: The Evolution of the Moral Mind and How It Made Us Human (Hardcover) 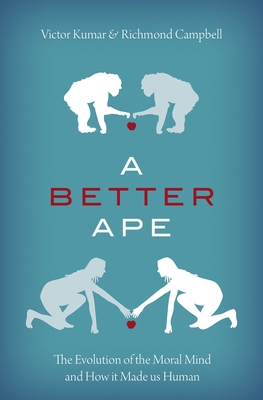 A Better Ape: The Evolution of the Moral Mind and How It Made Us Human (Hardcover)


In Stock—Click for Locations
Humans are moral creatures. Among all life on Earth, we alone experience rich moral emotions, follow complex rules governing how we treat one another, and engage in moral dialogue. But how did human morality evolve? And can humans become morally evolved? In A Better Ape, Victor Kumar and Richmond Campbell draw on the latest research in the biological and social sciences to explain the key role that morality has played in human evolution. They explore the moral traits that humans share with chimpanzees; how a more complex moral mind enabled Homo
sapiens to arise and out-compete other human species; and the place of morality alongside historic revolutions in technology and social organization. Throughout the book, Kumar and Campbell argue that morality co-evolved with intelligence and complex sociality. Morality prevents societal collapse
and enables complex knowledge. After unearthing the ancient origins of human morality, Kumar and Campbell use evolutionary theory to deliver profound insights about how to advance moral progress and resist moral regress, such as reducing animal suffering on industrial farms; capitalizing on the recent revolution in gay rights to
foster a nascent revolution in transgender rights; opposing intersectional inequality that impacts women and people of color in lower socioeconomic classes; and addressing major problems of global inequality, especially impending crises of injustice caused by anthropogenic climate change.
Understanding how we evolved--and how we continue to evolve--can help us become a better ape.