How the Color Line Bends: The Geography of White Prejudice in Modern America (Paperback) 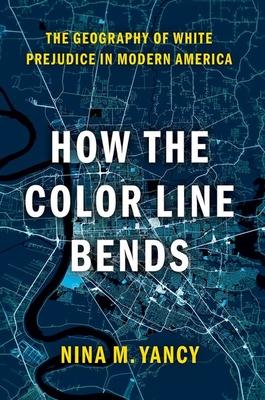 How the Color Line Bends: The Geography of White Prejudice in Modern America (Paperback)


In Stock—Click for Locations
(This book cannot be returned.)
In 2019, a group of Louisianans voted to create a new city in part of the Baton Rouge area. The effort drew attention not only because the decision would create a disproportionately White and wealthy city, but also because it would leave the area's considerably poorer, majority-Black school
district behind. As this story suggests, local geography, politics, and prejudice are linked in American racial politics. This book explores the relationship between where White Americans live and their attitudes about race. In How the Color Line Bends, Nina M. Yancy shows that what White people think depends on where they live--but not, as conventional wisdom might suggest, because they are more likely to feel threatened where race is salient. Rejecting this tendency to tacitly position White Americans as victims,
this book focuses on power, agency, and positionality in the study of prejudice and place. Yancy looks at the White perspective through a number of racialized issues, including education, affirmative action, and welfare spending in cities across the United States, as well as a vivid case study of
Baton Rouge. Being explicit about Whites Americans' racialized vantage point allows us to better appreciate the capacity of prejudice to ebb and flow in response to local conditions across a diverse nation. Yancy also illustrates why the color line remains relevant--if we appreciate the ability of
that line to harden or soften, but not necessarily break.

Nina M. Yancy holds a doctorate in Politics from the University of Oxford, where she was a Rhodes Scholar.