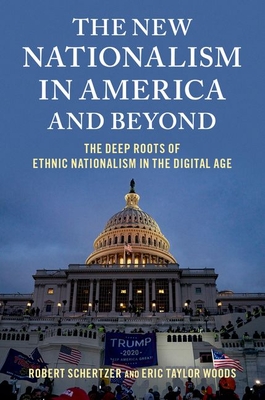 
Not On Our Shelves—Ships in 1-5 Days
(This book cannot be returned.)
A careful analysis of the social media campaigns of Donald Trump, Marine Le Pen, and the Brexit campaigners, which shows how today's new nationalists are cultivating support from white majorities by tapping into their history and culture. Across the West, there has been a resurgence of ethnic nationalism, populism, and anti-immigrant sentiment - a phenomenon that many commentators have called the new nationalism. In The New Nationalism in America and Beyond, Robert Schertzer and Eric Taylor Woods seek to understand why the bastions of liberalism are proving to be fertile ground for a decidedly illiberal ideology. To do so, they examine the social media campaigns of three of the most successful exemplars of the new nationalism: Donald Trump in the US, Marine Le Pen in France, and Brexit in the UK. Schertzer and Woods show how today's new nationalists are cultivating support from white majorities by drawing from long-standing myths and symbols to construct an image of the nation as an ethnic community. Their cutting-edge and multidisciplinary approach combines elements of political science, sociology, history, and communication and media studies, to show how leaders today are updating the historical foundations of
ethnic nationalism for the digital age.

Robert Schertzer is an Associate Professor at the University of Toronto. His research examines the intersection of three areas: federalism, constitutional law, and the politics of national identity. His work has appeared in top venues, including Ethnic and Racial Studies; Publius; Nations and Nationalism and the International Journal of Constitutional Law. His first book, The Judicial Role in a Diverse Federation (2016), was shortlisted for the best book on Canadian politics by the Canadian Political Science Association. Prior to joining the University of Toronto, he spent a decade with the Government of Canada working on social policy, immigration policy and intergovernmental relations. Eric Taylor Woods is a Lecturer (Assistant Professor) in Sociology at the University of Plymouth. His research examines the relationship between culture and politics, with a particular focus on nationalism. He has published in numerous academic journals, such as: American Journal of Cultural Sociology, Ethnic and Racial Studies, Ethnicities, and Nations and Nationalism. His most recent book, entitled, A Cultural Sociology of Anglican Mission and the Indian Residential School in Canada: The Long Road to Apology (2016), engages with theories of cultural trauma to shed new light on Christian-Indigenous relations in Canada.