Religion's Sudden Decline: What's Causing It, and What Comes Next? (Paperback) 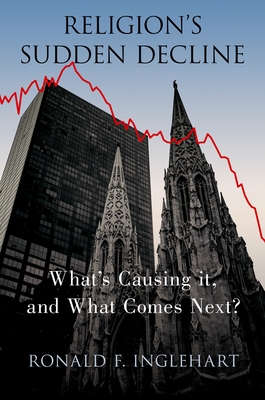 Religion's Sudden Decline: What's Causing It, and What Comes Next? (Paperback)


Not On Our Shelves—Ships in 1-5 Days
Mass attachment to religion is rapidly declining in most of the world; Why, and What comes next? The world is becoming less religious. Since 2007, there has been a pervasive decline in religious belief and most of the world's people now say that God is less important in their lives than they said He was in the quarter century before 2007. The American public showed the most dramatic shift of
all. The United States, which for many years stood as a highly religious outlier among the world's high-income countries, now ranks as the 12th least religious country for which data are available. Many factors contributed to this dramatic worldwide shift, but as Inglehart shows, certain ones stand
out. For centuries, virtually all major religions encouraged women to stay home and produce as many children as possible; and they sternly discouraged divorce, abortion, homosexuality, contraception, and any other form of sexual behavior not linked with reproduction. These norms were necessary for
societies to survive when facing high infant mortality and low life expectancy: societies that didn't instill them tended to die out. Recent technological advances have greatly increased life expectancy and cut infant mortality to a tiny fraction of its historic levels, making these norms no longer
necessary for societal survival. These norms require repressing strong natural urges, but, since they present traditional norms as absolute values, most religions strongly resist change. The resulting tension, together with the fact that rising existential security has made people less dependent on
religion, opened the way for an exodus from religion. Utilizing a massive global data base, Inglehart analyzes the conditions under which religiosity collapses, and explores its implications for the future.

Ronald F. Inglehart is the Lowenstein Professor of Political Science emeritus at the University of Michigan. He helped found the Euro-Barometer surveys and is Founding President of the World Values Survey Association, which since 1981 has repeatedly surveyed representative national samples of thepublics of 108 countries containing over 90 percent of the world's population. He is a fellow of the American Academy of Arts and Sciences and of the American Academy of Political and Social Science and has three honorary doctorates.