The Problem with Science: The Reproducibility Crisis and What to Do about It (Hardcover) 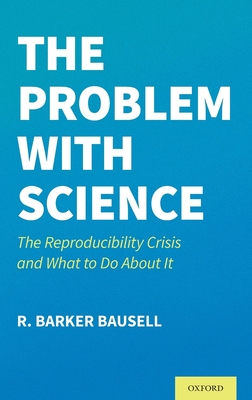 The Problem with Science: The Reproducibility Crisis and What to Do about It (Hardcover)


Not On Our Shelves—Ships in 1-5 Days
Recent events have vividly underscored the societal importance of science, yet the majority of the public are unaware that a large proportion of published scientific results are simply wrong. The Problem with Science is an exploration of the manifestations and causes of this scientific crisis, accompanied by a description of the very promising corrective initiatives largely developed over the past decade to stem the spate of irreproducible results that have come to characterize many of our sciences. More importantly, Dr. R. Barker Bausell has designed it to provide guidance to practicing and aspiring scientists regarding how (a) to change the way in which science has come to be both conducted and reported in order to avoid producing false positive, irreproducible results in their own work and (b) to change those institutional practices (primarily but not exclusively involving the traditional journal publishing process and the academic reward system) that have unwittingly contributed to the present crisis. There is a need for change in the scientific culture itself. A culture which prioritizes conducting research correctly in order to get things right rather than simply getting it published.

R. Barker Bausell is Professor Emeritus at the University of Maryland, Baltimore, where he served as a research methodologist and biostatistician on the faculties of both the schools of medicine and nursing for over 30 years. He has authored 14 scientifically related books, and founded and served for 33 years as the Editor-in-Chief of the refereed medical evaluation journal Evaluation & the Health Professions.