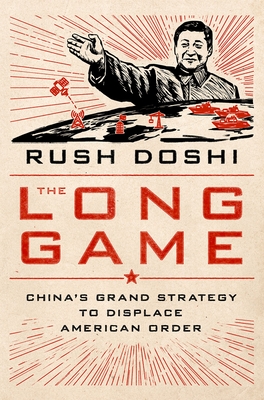 
On Our Shelves Now at:
Drawing from decades worth of primary sources, a unique look into the Chinese government's grand strategy and what its true foreign policy objectives mean for the United States. For more than a century, no US adversary or coalition of adversaries--not Nazi Germany, Imperial Japan, or even the Soviet Union--has ever reached sixty percent of US GDP. China is the sole exception, and it is fast emerging into a global superpower that could rival, if not eclipse, the United States. What does China want, does it have a grand strategy to achieve it, and what should the United States do about it? In The Long Game, Rush Doshi draws from a rich base of Chinese primary sources, including decades worth of party documents, leaked materials, memoirs by party leaders, as well as careful analysis of China's conduct, to provide a history of China's grand strategy since the end of the Cold War. Taking readers behind the Party's closed doors, he uncovers Beijing's long, methodical game to displace America from regional and global order through three sequential "strategies of displacement." Doshi shows how China's strategy is profoundly shaped by key events that change its perception of American power--the end of the Cold War, the 2008 Global Financial Crisis, the populist elections of 2016, and the coronavirus pandemic of 2020. Doshi offers a comprehensive yet "asymmetric" plan for an effective US response to the China challenge. Ironically, his proposed approach takes a page from Beijing's strategic playbook to undermine China's ambitions and strengthen American order without competing dollar-for- dollar, ship-for-ship, or loan-for-loan. A bold assessment of what the Chinese government's true foreign policy objectives are, The Long Game offers valuable insight to the most important rivalry in world politics.

Rush Doshi is the founding director of the Brookings China Strategy Initiative and a fellow (on leave) at Yale Law School's Paul Tsai China Center. Previously, he was a member of the Asia policy working groups for the Biden and Clinton presidential campaigns and a Fulbright Fellow in China. His research has appeared in The New York Times, The Wall Street Journal, The Washington Post, Foreign Affairs, and International Organization, among other publications. Proficient in Mandarin, Doshi received his PhD from Harvard University focusing on Chinese foreign policy and his bachelor's from Princeton University. He is currently serving as Director for China on the Biden Administration's National Security Council (NSC), but this work was completed before his government service, is based entirely on open sources, and does not necessarily reflect the views of the US Government or NSC.