Populism and Civil Society: The Challenge to Constitutional Democracy (Paperback) 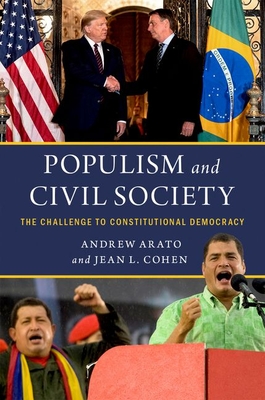 Populism and Civil Society: The Challenge to Constitutional Democracy (Paperback)


Not On Our Shelves—Ships in 1-5 Days
From the co-authors of the classic Civil Society and Political Theory, Populism and Civil Society offers an empirically informed, systematic theoretical analysis of the political challenges posed by contemporary populism to constitutional democracies. Populism and Civil Society provides a political assessment and critical theory of the significance of what is now a global phenomenon: the growing populist challenge to constitutional democracy. Andrew Arato and Jean L. Cohen examine the challenge it presents in terms of its four main organizational
forms: socio-political movement, political party, government, and regime. They focus in particular on the tense relationship of populism to democracy and of populism to constitutionalism. Without presupposing the authoritarian logic of the phenomenon in the definition, the book demonstrates it
through the reconstruction of the main elements used by advocates to identify populism. To be sure, the authoritarian logic of populism is not realized in every instance of it, and the book analyses why this is so. Across modern history, many populist governments have in fact been hybrid regimes,
blending authoritarian elements and residual democratic forms. Populism on its own, however, is a form of abusive or instrumental constitutionalism that typically relies on the alleged permanence of the quasi-revolutionary constituent power. The book concludes by outlining a non- and anti-populist
project of democratization and social justice, distinguishing between the popular and the populist and offering a program that is nourished by the plurality of democracies and which rescues some of left populism's more benevolent host ideologies.