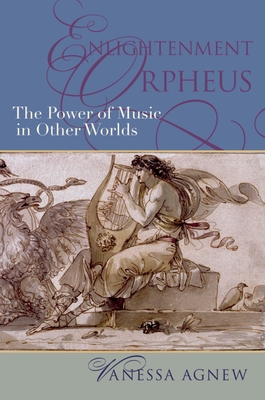 
Special Order—Subject to Availability
The Enlightenment saw a critical engagement with the ancient idea that music carries certain powers - it heals and pacifies, civilizes and educates. Yet this interest in musical utility seems to conflict with larger notions of aesthetic autonomy that emerged at the same time. In Enlightenment Orpheus, Vanessa Agnew examines this apparent conflict, and provocatively questions the notion of an aesthetic-philosophical break between the eighteenth and nineteenth centuries. Agnew persuasively connects the English traveler and music scholar Charles Burney with the ancient myth of Orpheus. She uses Burney as a guide through wide-ranging discussions of eighteenth-century musical travel, views on music's curative powers, interest in non-European music, and concerns about cultural identity. Arguing that what people said about music was central to some of the great Enlightenment debates surrounding such issues as human agency, cultural difference, and national identity, Agnew adds a new dimension to postcolonial studies, which has typically emphasized the literary and visual at the expense of the aural. She also demonstrates that these discussions must be viewed in context at the era's broad and well-entrenched transnational network, and emphasizes the importance of travel literature in generating knowledge at the time. A new and radically interdisciplinary approach to the question of the power of music - its aesthetic and historical interpretations and political uses - Enlightenment Orpheus will appeal to students and scholars in historical musicology, ethnomusicology, German studies, eighteenth-century history, and comparative studies.