Meditations for the Humanist: Ethics for a Secular Age (Paperback) 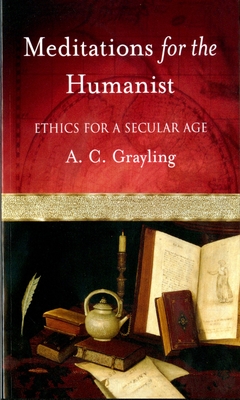 Meditations for the Humanist: Ethics for a Secular Age (Paperback)

By A. C. Grayling


Not On Our Shelves—Ships in 1-5 Days
(This book cannot be returned.)
"Magnanimity is in short supply," writes A. C. Grayling is this wonderfully incisive book, "but it is the main ingredient in everything that makes the world a better place" And indeed Meditations for the Humanist: Ethics for a Secular Age is itself a generous, insightful, wide-ranging, magnanimous inquiry into the philosophical and ethical questions that bear most strongly on the human condition.
Containing nearly fifty linked commentaries on topics ranging from love, lying, perseverance, revenge, racism, religion, history, loyalty, health, and leisure, Meditations for the Humanist does not offer definitive statements but rather prompts to reflection. These brief essays serve as springboards to the kind of thoughtful examination without which, as Socrates famously claimed, life is not worth living. As Graying notes in his introduction, "It is not necessary to arrive at polished theories on all these subjects, but it is necessary to give them at least a modicum of thought if one's life is to have some degree of shape and direction." The book is divided into three sections-Virtues and Attributes, Foes and Fallacies, and Amenities and Goods-and within these sections essays are grouped into related clusters. But each piece can be read alone and each is characterized by brevity, wit, and a liveliness of mind that recalls the best of Montaigne and Samuel Johnson. Grayling's own
perspective on these subjects is broadened and deepened by liberal quotations from Sophocles and Shakespeare to Byron, Twain, Proust, Simone de Beauvoir, Martin Luther King, Jr., and many others.
For those wishing to explore ethical issues outside the framework of organized religious belief, Meditations for the Humanist offers an inviting map to the country of philosophical reflection.

A. C. Grayling teaches philosophy at the University of London. He writes a weekly column "The Last Word" for The Guardian and is a frequent contributor to The New York Times Book Review, Financial Times, and Lingua Franca. The author of a biography of William Hazlitt and several introductions to philosophy, Mr. Grayling lives in London.